The week after adding new releases from Blasted Church and Painted Rock to my collection I found myself with the opportunity to acquire some more hard-to-come-by wines that I couldn’t pass up. Fresh off a spectacular Top Ten ranking at the Canadian Wine Awards, Van Westen Vineyards was ready to release some of Rob Van Westen’s award-winning wines. Contributing to Van Westen’s eighth-place finish in the Awards’ Winery Performance Report were five medal winners from amongst the six wines submitted, including two gold medals! Knowing that every wine Rob makes can easily be considered “small lot” I ordered a few bottles before they all disappear! 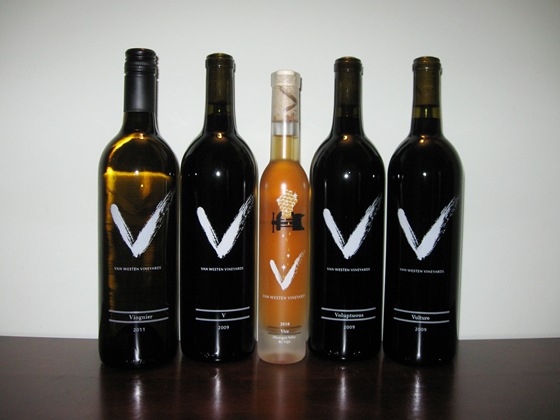 The two gold medal winners were just released at the beginning of December, and include a 2011 Viognier limited to just 102 cases, of which I managed to get a couple bottles. Anthony Gismondi described it as vibrant, finessed, and balanced, albeit “perhaps a bit too floral…” He did suggest it should improve in bottle over the next year, so I’m not in too much of a hurry to crack mine open just yet. The other gold medal was awarded to the 2009 “Voluptuous”, a blend of two thirds Merlot and one third Cabernet Franc, of which only 204 cases were produced. Having tasted previous vintages of Voluptuous I’m fairly confident this a wine that should be aged for at least a couple more years to allow the tannins to soften; Gismondi suggests the same thing in his glowing 91-point review.

The other two Van Westen reds I picked up were released earlier this fall, and include another red blend, this one named simply “V”, to recognize the five grape varieties included: 68% Merlot, 25% Cab Franc, 5.6% Malbec, 1% Cabernet Sauvignon, and a hint of 0.4% Petit Verdot. I’m told this one will be slightly more approachable at present, but even still Gismondi has suggested “several years to round out” could be beneficial. A slightly higher production quantity of 301 cases are listed for V, but given the drastically increased press the Canadian Wine Awards have brought don’t expect it to last for very long!

The final red wine is the aggressively-named “Vulture” varietal Cabernet Franc, of which a measly 42 cases were released September first! Somehow Rob continues to come up with witty names for his wines that retain the V nomenclature! Vulture is a particularly interesting wine, which we got the chance to enjoy at the BC Wine Appreciation Society Annual Dinner earlier this year. The wine was produced without the addition of sulfites as preservatives; no doubt a nerve-wracking procedure considering it spent 19 long months in barrel. When I tasted it in May I was impressed at the power, and look forward to holding this bottle in my cellar for another couple of years to see how it develops. In fact, Gismondi has suggested 2-3 years to maturity in order to allow it to “be the red wine it can be.”

The last bottle I acquired was one for which I’m already kicking myself for not obtaining more, ealier: 2010 “Vice” Viognier icewine. Despite only one precious bottle I consider myself lucky to have obtained what sounds like one of the last ones for sale; it is now sold out after the 89 cases produced spent more than a year on the market. In between the wine’s release in September 2011 and selling the last bottle, Rob treated the BCWAS members to this sumptuous treat with dessert at our dinner in May – it was positively delicious. Reviewing it last year Gismondi was more than pleased to try Viognier icewine for the first time, and felt it to be a fairly priced, well balanced and complex iteration. Rob entered the wine into this year’s Canadian Wine Awards, where it took home a silver medal. 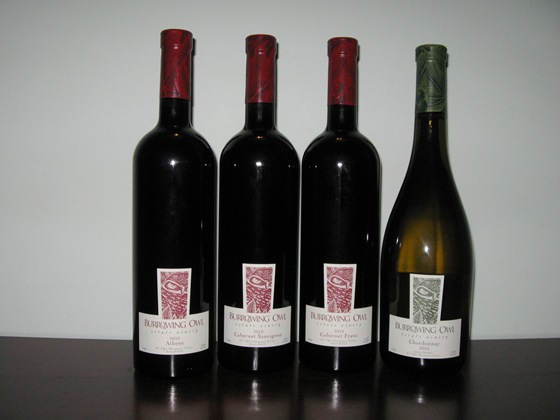 December also saw new releases from a much larger and more established winery, in the form of three 2010 reds and Chardonnay from Black Sage Bench icon Burrowing Owl. Van Westen and Burrowing Owl couldn’t be more different in their size and scope, but both ultimately focus on producing excellent wine for their many fans. Since Burrowing Owl offers shipping in most even-numbered configurations (2, 4, 6, or 12-bottle boxes) I was able to easily order one of each new release, to add to some growing vertical collections I’m developing.

Burrowing Owl’s fully oaked (2010) Chardonnay is not one I have had much experience with, but it sounds like a wine for occasional enjoyment when you’re seeking a rich flavour profile. Malolactic barrel fermentation in new and one-year-old primarily French oak was followed by nine month aging and lees stirring to provide for toasty, buttery, nutty characteristics overtop melons and apples. John Schreiner gave it a try recently and felt it deserving of a place under his Christmas tree.

The three newly released reds likely won’t remain available online for long, although they should remain on the shelves in the wine shop itself for a least a few months. The winery has yet to produce complete wine profile sheets for the new releases, so the online tasting notes remain fairly limited in detail. I’m particularly excited to get a bottle of the third vintage of “Athene”, the winery’s new Cabernet-Syrah blend. The first release from 2008 sold out very quickly, with much of it snapped up by restaurants, but I did manage to get a bottle of last year’s 2009 vintage. The 2009 took home a silver medal from the Canadian Wine Awards, and gold at this Fall’s BC Wine Awards.

Also newly released are Burrowing Owl’s 2010 Cabernet Franc and Cabernet Sauvignon, both of which I’ve added to what are now four year verticals of these wines. The winery suggests “an intense nose of blackberries and ripe cherries” on the Cabernet Franc, leading into a palate favouring red fruit and possessing well-integrated tannins. The Cabernet Sauvignon is said to express darker fruit and a complex, well structured palate “built to a last a decade or more.” With these wines being brand new, I haven’t yet heard from anyone who has sampled them, but I do have high hopes, despite the trying vintage conditions in 2010.

All these new wines have made great contributions to my cellar. With the holiday season just around the corner I most certainly need to start making room for them and others by drinking and sharing some of the older bottles – shouldn’t be a problem!