On Monday the BC Wine Appreciation Society held their Annual Dinner, hosted this year by new Yaletown bistro The Flying Pig, with special guests Robert and Tammi Van Westen, from Van Westen Vineyards in Naramata. Although Flying Pig owners John Crook and Erik Heck had long ago sworn off of events like winemaker’s dinners they found themselves making an exception for the chance to partner with Van Westen, to the benefit of the BCWAS! John and Erik devised an ambitious five-course menu with wine pairings that covered the gamut of Van Westen’s finely crafted portfolio of whites and reds, with the goal of ensuring that no one would leave even remotely hungry. 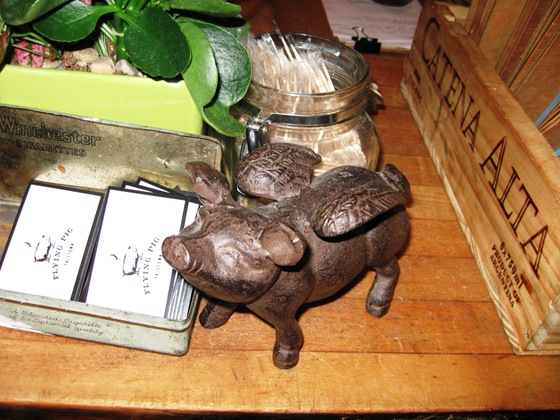 As guests arrived alongside The Flying Pig’s regulars (John and Erik ensured that a few tables remained open for walk-ins), they received a glass of the 2010 Vivacious to sip while admiring the menu and catching up with other members. This crisp Pinot Blanc-Pinot Gris blend is a big seller on the wine list, and everyone clearly enjoyed the ode to summer it conjured up with lots of citrus aromas and grapefruit and tree fruit flavours.

Before the first course was brought out we heard from John, as he shared his philosophy and goals for the restaurant – the focus being fresh, local ingredients from the many great producers here in BC. Robert Van Westen also spoke to us about his winemaking practices and how nicely they dovetail with the straightforward purity of The Flying Pig. With his winery still young and growing, Van Westen plans to max out at only 3,000 cases of wine annually. Robert told us about how he avoids practices that excessively manipulate the wine, following the philosophy of his mentor Bill Eggert (owner of Fairview Cellars) – who considers himself a grape-grower first and foremost. As such, the winery is best considered simply a processing facility to effect the transfer of grapes to bottle. 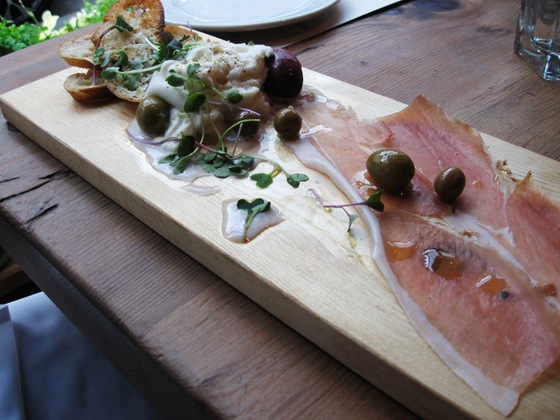 Without further ado the very efficient wait staff soon brought out our first course, along with Van Westen’s 2010 Vino Grigio (i.e. Pinot Grigio). The wooden plank serving dishes were richly festooned with fresh Burratta cheese, marinated olives, and local artisan-cured Speck, with extra cheese and crispy baguette slices for the vegetarians. The juicy cheese and bright olives paired wonderfully with the clean, tart Vino Grigio, and I heard from my tablemates that it was equally perfect with the fatty, salty Speck. Flavours of Granny Smith apples and a hint of linen led to a refreshing lemony finish on the wine, and it didn’t take long for only a few olive pits to remain as evidence of the delicious opener! 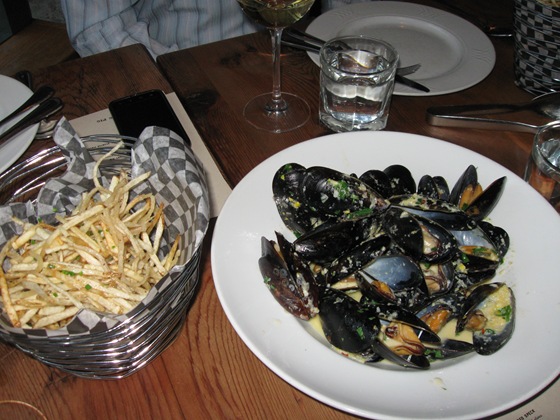 For our next course guests were treated to local BC specialty Honey Mussels, alongside generous baskets of delectable “Pomme Allumettes,” served family style. John explained that these crispy matchstick fries were inspired by those addictive Hickory Sticks so many of us enjoyed in our youth (and perhaps still do!). The mussels were bathed in an atypical corn broth, rich in spicy, savoury flavours that made mouths water. To enjoy with the heaping servings of food was Van Westen’s delightfully golden 2010 Viognier, of which only 150 cases were produced from a vintage that demanded rigorous crop thinning. Fortunately there was enough left for us to enjoy, as the tropical and floral aromas led quite nicely to a rich, almost buttery palate of apricot and lemon.

Before the next course of Geldermans Farms Pork 2 Ways, a round of taster glasses revealed an unexpected treat: Robert had brought barrel samples of his upcoming Pinot Noir collaboration with Tom Di Bello. The intensely dark coloured wine – from the 2011 vintage – came out of 100% French Oak barrels, and is not scheduled for bottling until September, with a Spring 2013 release of only 100 cases to follow. Murmurs of delight were obvious as guests inhaled the ripe, earthy, black cherry aromas, and enjoyed flavours of blackberry and plum, with a long blueberry jam finish. More than a few requests for the wine to be bottled now had to be turned down! I myself am extremely excited to see how it tastes a year from now after such an impressive early showing. 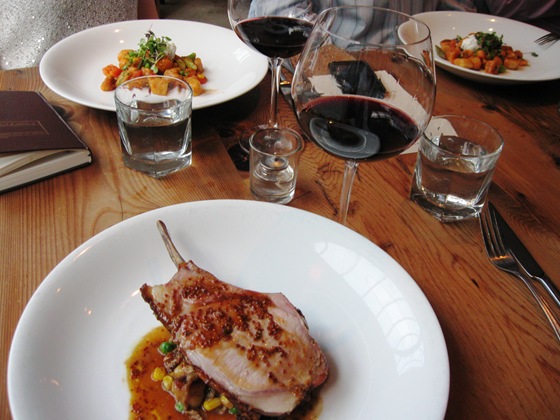 With everyone rapidly filling up with mussels and fries the next course was daunting, especially when we started to see the enormous bone-in pork chops coming around the tables. Even the veteran carnivores in the room seemed intimidated by the portions, which came atop pulled pork gnocchi for extra oomph! Vegetarians were treated to delicious mixed vegetable gnocchi topped with a generous dollop of creamy herbed goat cheese. We watched with bemusement as our table-mates navigated their plates – and reminded them this was only the third of five courses!

To fill our glasses at this point was the brand new release of “Vulture”, Van Westen’s 2009 varietal Cabernet Franc. Previous bottlings of Cabernet Franc from Van Westen came only in magnums of “Vrankenstein” (with partial proceeds to benefit the BC Children’s Hospital), so there was clear excitement to see it in regular bottles at long last. Robert was excited to share with us his successful efforts to produce Vulture without the use of sulphur, a challenging practice in purity. At least a couple hours of decanting was recommended for this unfiltered wine, and the dusty tannins made for a superb food companion. It’s definitely a powerful wine, courtesy of 18 months in barrel, and the flavours of dark berries and currants actually ended up reminding me of oatmeal raisin cookies! 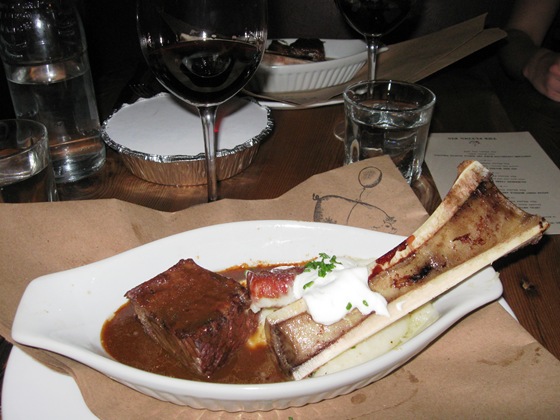 With another hearty course yet to come takeout containers soon started to appear on the tables as guests took their pork home for future enjoyment. Our empty glasses were exchanged for new fills of 2007 “Voluptuous”, Van Westen’s Merlot-Cabernet Franc blend, and gasps began to fill the air at the reveal of the fourth course: Wine-Braised Beef Short Rib and Mashed Potato – accompanied by almost comically large roasted marrow bones. Anyone who had boldly finished their pork rack was about to receive an even greater challenge! On the vegetarian side of the table we received equally generous helpings of wild mushroom risotto to savour as we once again watched our friends take on the massive dish in front of them.

Despite being five years old at this point, the Voluptuous was still fairly tight, but the creamy risotto and the rich bone marrow helped greatly to mellow it out. As the wine opened up in our glasses we experienced notes of forest floor, cranberries, licorice, spices, and minerals. Robert pointed out that Voluptuous was the first wine he made, and will soon be accompanied in his portfolio by a bigger brother called “V”, to be released this fall, with the addition of Cabernet Sauvignon, Petit Verdot, and Malbec to the blend. Taking the time to mature the additional vines and allowing the blend to take form in barrel will no doubt pay off for Van Westen, as the winery moves further into red wine territory. 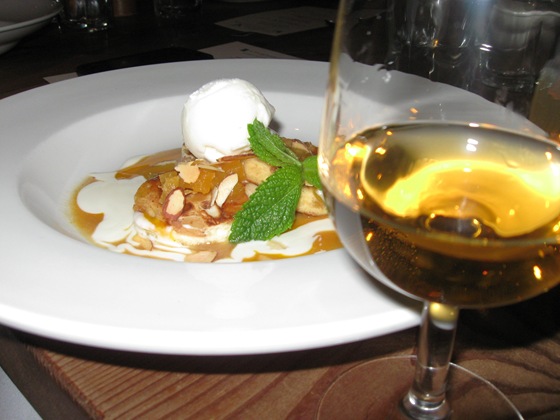 At this point the restaurant was almost certainly running low on take-out containers, as wise guests made sure to leave room for the delectable-sounding dessert course of Honeycomb Caramelized Blinis and Vanilla-scented Pineapple, with Crème Fraiche Gelato. Fortunately I took the liberty of getting a good portion of my risotto to go, and was able to savour the delicate flavours alongside a near perfect pairing of 2010 “Vice” Viognier icewine. The silky smooth, deeply golden nectar showed off aromas of almond and caramel apple, with cinnamon spice and peach syrup flavours on the toasty, tart finish. Icewine is new to the program at Van Westen, and it certainly appears to have been a very successful start that hopefully continues to appear in subsequent vintages.

The BCWAS members who attended this exceptional dinner at The Flying Pig left fully satisfied by a generous and exceptionally crafted menu with perfectly paired, delicious wines all around. The entire staff at The Flying Pig provided seamless and extremely attentive service that was noticed early on and often. My particular thanks goes to John and Erik for accommodating vegetarian palates without a hiccup. Lastly, thanks to Robert and Tammi Van Westen, who shared great stories and details of their winery that complemented the many wonderful wines and special rarities they brought along. Kudos to the BC Wine Appreciation Society for another exciting and memorable event!