The month of May saw quite a few new bottles of wine find their way into my cellar. Among the most exciting new arrivals were the spring releases from two of my favourite all-around wineries: Tinhorn Creek and CedarCreek. As a member of both Tinhorn’s “Crush Club” and CedarCreek’s “Platinum Club” I receive regular shipments of new releases from both wineries. At the beginning of the month Tinhorn’s spring shipment of whites showed up, followed two weeks later by a similar collection from CedarCreek, both boxes full of freshly bottled bright 2011 whites and Rosés, ready for summer enjoyment. 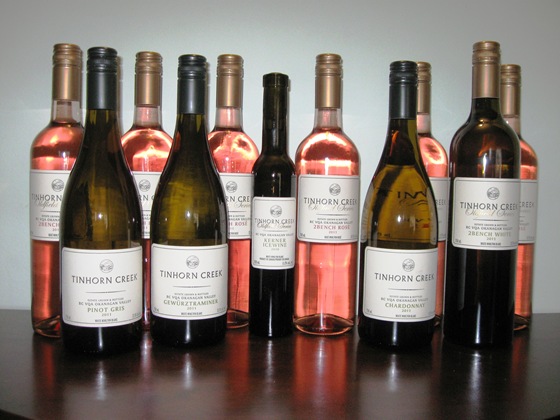 Tinhorn Creek’s Spring Shipment included new 2011 vintages of varietal Chardonnay, Pinot Gris, and Gewurztraminer, plus the Oldfield Series 2Bench White blend, as well as the rare Oldfield Series 2Bench (Cabernet Franc) Rosé. A small but precious bottle of 2010 Oldfield Series Kerner Icewine rounded out the box. Being the smart fan that I am I had also added an additional six bottles of Rosé, knowing it is typically only available in the wine shop and at the on-site Miradoro Restaurant. Despite 2011 producing the largest Rosé production since the wine was added to the portfolio in 2009 it will likely still sell out quickly thanks to plenty of positive buzz and loyal fans.

The varietal whites from Tinhorn are always solid, and for 2011 they continue to show winemaker Sandra Oldfield’s thoughtful choices. The prime example this year is the Pinot Gris, for which one third of the grapes were fermented (in steel barrels) malolactically, to give the wine greater body and a food-friendly texture. Having already consumed my first bottle, and eager for more, I can fully echo Anthony Gismondi’s praise: the lower alcohol (a hallmark of the 2011 vintage) and slightly fuller texture makes an already versatile wine even more so. Plenty of local reviewers have suggested inspired food pairings ranging from spicy crab cakes or creamy mushroom chicken, to citrus-flavoured fish dishes and hearty salads.

The Pinot Gris is not the only new Tinhorn Creek release for which I already need to replenish my stocks, as the 2Bench White didn’t last much longer before being joyfully consumed. I’ve often said that were I to have a “house white” it would be Sandra’s masterful blend of Chardonnay, Sauvignon Blanc, Viognier, Semillon, and Muscat. Like the Pinot Gris (and the aforementioned Rosé), the 2Bench is a superb food wine. I brought my bottle to a seafood feast held by some friends during the height of spot prawn season and I’m told it shone; it even enlightened the admittedly absurd vegetarian shrimp I also attempted to share. The particular beauty of the 2Bench White is in the mix of tropical and aromatic characteristics that come from the carefully measured blend. Best of all, the refreshing citrus and melon flavours mean it can hold its own without food should you find the cupboard bare of everything but wine; giving you time for a discussion with the contents of your glass.

While I make room for more Tinhorn whites I fortunately still have a few bottles of Rosé to enjoy as the weather warms. Unlike in previous years when the supply was quite limited there was a good amount of Rosé from the 2011 vintage at Tinhorn Creek. Wise vineyard decisions early in the season saw a block of Cabernet Franc set aside specifically for Rosé once the weather started hinting at a short, cool growing season. Having already enjoyed a few bottles so far, including at the winery itself (more on that to come) I’ve appreciated the dry palate and bright berry nose; it’s a wine that easily lends itself to light, fresh summer fare like salads, thin-crust pizza, and veggie burgers. In addition to discussing Tinhorn Creek’s admirable sustainability measures, writer John Schreiner recently pointed out the Rosé is a refreshing wine “looking for a picnic.” I’ll keep a bottle in reserve for whenever the picnic weather arrives!