The dynamic duo of Township 7 Public Relations Manager Lori Pike-Raffan and Winemaker Bradley Cooper were on hand at the Listel Hotel mid-April to show off a wide range of delicious flavours they brought to the BC Wine Appreciation Society. With three white wines, a Rosé, and six reds on the table a huge part of the viniferous family was before us, from Sauvignon Blanc to Cabernet Sauvignon. Brad even brought the literal terroir in the form of two jars of Naramata and Langley soils! 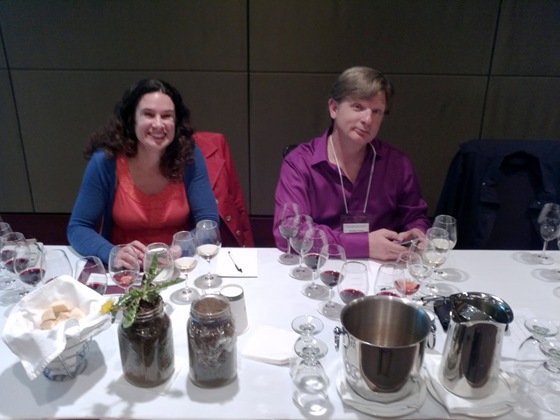 Before the sniffing and sipping began in earnest, Brad walked us through the details of Township 7’s approach to grape-growing and winemaking, with details of the winery’s estate and contracted vineyards in the Fraser, Similkameen, and Okanagan valleys. A thorough and impressive PowerPoint presentation provided information and illustrations of the terroir from which Township 7 produces their award-winning wines, with details going back as far as the Cretaceous Period, 150 million years ago!

In addition to describing the various glacial deposits and soil types throughout the vineyards, Brad pointed out the advantages of long days with high light intensity, low rainfall, and large diurnal temperature swings. The cool evenings that come about in the Okanagan maintain sufficient acids and keep the grapes from accumulating excess sugar, all leading to superb flavour development. As he was speaking, guests were invited to pass around the provided jars of soil to appreciate the dramatic difference in composition and density of the silty Naramata soil and the heavy, clay-rich Langley sample. 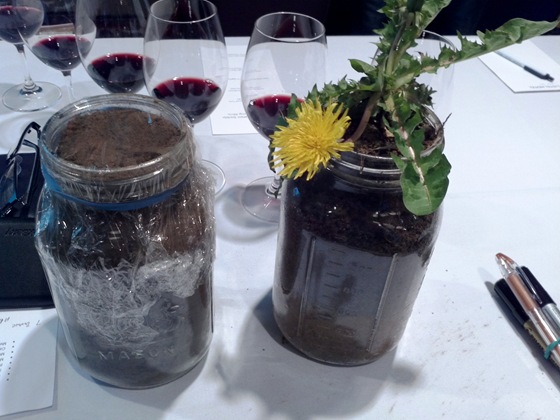 With no time to lose we soon delved into the many wines to taste, starting with the 2009 Sauvignon Blanc, a now sold out vintage showing how this often youthful wine can become fuller and more lush over time. A tiny 2% contribution from Muscat helped bring out flavours of honeydew melon, and the texture showed off reduced acidity and more obvious minerality from the time in bottle.

The 2009 Chardonnay was next, showing very subtle oak on the nose, despite full barrel fermentation, and a full texture courtesy of malolactic fermentation and extended sur-lie contact. In 2009 the Chardonnay came from four different vineyards in Naramata, Oliver, and Cawston, making it as complex as any other blend, despite being a single varietal.

Our third and final white was revealed to be an unfiltered tank sample of the 2011 7 Blanc blend. With about two thirds Gewurztraminer and one third Pinot Gris the young wine was very fruit forward and perfumed on the nose. Slightly off-dry on the palate with bright acidity it will no doubt have a prosperous future in food pairing for Asian-inspired dishes in particular. 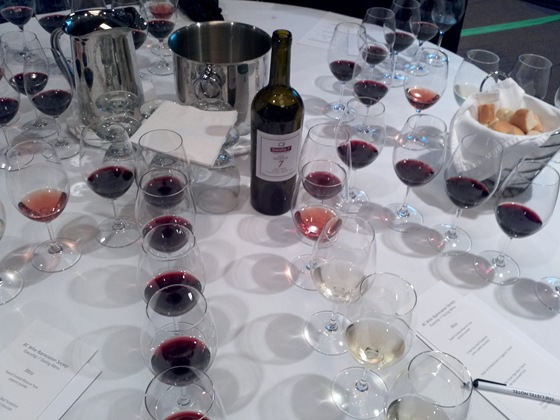 A mature Rosé from 2009 came next; with a little rusty colour this “compilation Rosé” is a blend of Pinot Noir co-fermented with Chardonnay, plus small percentages of Muscat, Cabernet Franc, and Merlot from vineyards in the Okanagan and Fraser valleys. It shows a flavour palate that focuses on strawberry, with sufficient body and acid for successful food pairing. Interestingly, Township 7 didn’t make a 2010 Rose, and so the 2011 is awaiting release once the remaining 2009 is sold.

As we finished the first pass through the white wines we were treated to tasting plates from Listel Executive Chef Whittaker, who shared Seared Albacore Tuna, Rare Beef Tenderloin, Wild Mushroom & Eggplant Tartlet, and Tiger Blue cheese with red wine stewed fruits. For vegetarians there was car-grilled veggies and even more spectacular cheeses to enjoy. 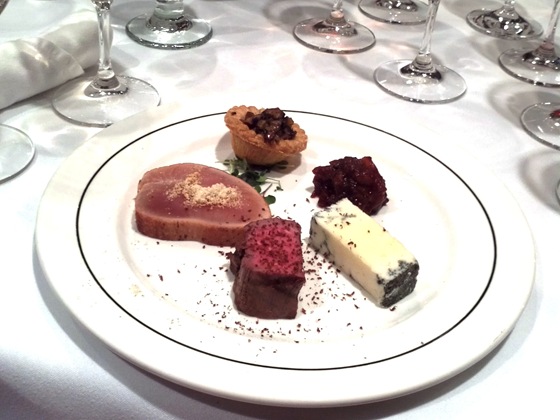 Moving on to the reds – each one unfiltered – we began with a mini-vertical of the 2007 and 2008 Merlots. Both wines include single digit percentages of Cabernet Sauvignon, with the current release 2008 adding an additional bit of Cabernet Franc for extra backbone and complexity. The 2007 Merlot was a favourite of James Suckling, who felt it was the best Merlot of his Canadian tasting session. I noticed dusty tannins and plenty of blueberry characters, while the 2008 seemed a bit fruitier on the nose and palate. A still-young 2008 Cabernet Sauvignon followed the Merlots, with flavours of chocolate and cherries, and tannins suggesting it will continue to mature for several more years despite 26 months in oak already. 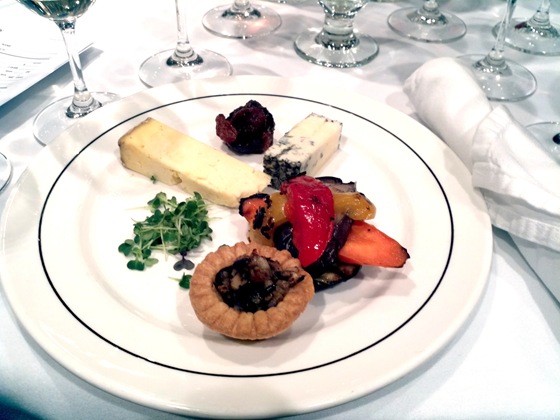 The last three wines comprised a vertical of the Reserve 7 Meritage, from 2006 to 2008. While debates about favourites went back and forth Lori described the amazing accomplishments of quadriplegic artist Robb Dunfield, who mouth-painted the art for the label of the limited release 2006 edition. Brad then pointed out that the upcoming 2009 Meritage will include Petit Verdot and Malbec for the first time.

While we emptied our glasses and considered the best food and wine pairings Lori shared details of all the spectacular events Township 7 holds at both their locations, including the fall grape stomp – captured on video in 2011 by BCWAS member and Shaw TV reporter Kendall Harris. Whether it’s wine, food, art, music, or even live theatre amongst the vines, Township 7 goes all out for their fans!