This past weekend saw another gathering of our monthly wine club with friends, and another opportunity to share more of our culinary creativity with each other over delicious wines. With plenty of sunshine and warm weather to brighten our spirits everyone was in a great mood as we shared welcome cocktails from our generous hosts. Enthused by the opportunities provided when taking on the appetizer course my wife and I had brought a pre-appetizer canapé selection as well: Havarti & watermelon-skewers plus cucumber slices topped with bright carrot-ginger dip (courtesy of one of my favourite cookbooks). Little did  we know the cucumber would portend a consistent – and much welcomed – element throughout the remainder of the meal. We were much amused when we realized we’d somehow unconsciously coordinated yet again! 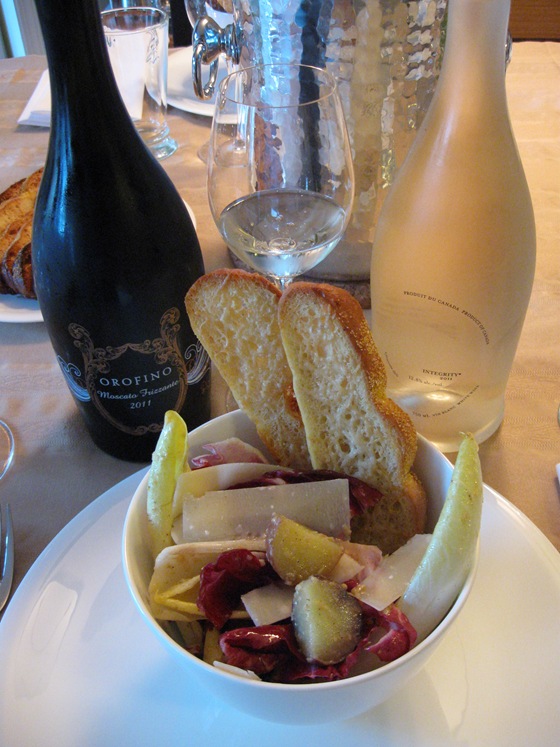 With cocktails and canapés quickly consumed, we leapt into action and began preparing the sit-down appetizer course. After much humming and hawing about what to serve we had recently settled on an exciting recipe from the Spring 2012 issue of Taste Magazine put out by BC Liquor Stores. The Radicchio, Endive, and New Potato Caesar Salad with Ciabatta Garlic Crisps sounded like an ideal pairing for the two freshly bottled Frizzante wines I had acquired for the occasion. Months of patient waiting finally had been rewarded recently when Orofino released their brand new Moscato Frizzante almost simultaneous with 8th Generation’s newest “Integrity” Frizzante.

As everyone crunched their way through crisp radicchio and endive, we started with the drier Orofino wine, and were immediately impressed with the elderflower and orange blossom aromas. The bright acidity and clean finish made for an excellent pairing with the salad, and the wine carries its bubbles for quite some time. With only 300 cases produced by this increasingly popular Similkameen winery, this beautifully bottled wine won’t last long. Thankfully we will soon have an opportunity to buy more during our upcoming visit to Orofino in June!

For a different experience we moved on to the 8th Generation wine, now in its third vintage after beginning with straight Chardonnay Frizzante in 2009. The current 2011 release blends about one third Pinot Gris into the Chardonnay, while subtracting the Sauvignon Blanc component used in 2010. 8th Generation’s take on Frizzante is clearly a very different creation, equally likeable but much sweeter and creamier than the Moscato. Fresh flavours of melon, pear, and tropical hints of pineapple were present, making me glad I had recently acquired a half-case for more enjoyment over the summer months! We continued to enjoy comparing the two different wines while our hosts finished preparing the entree course, and decanting a delicious treat! 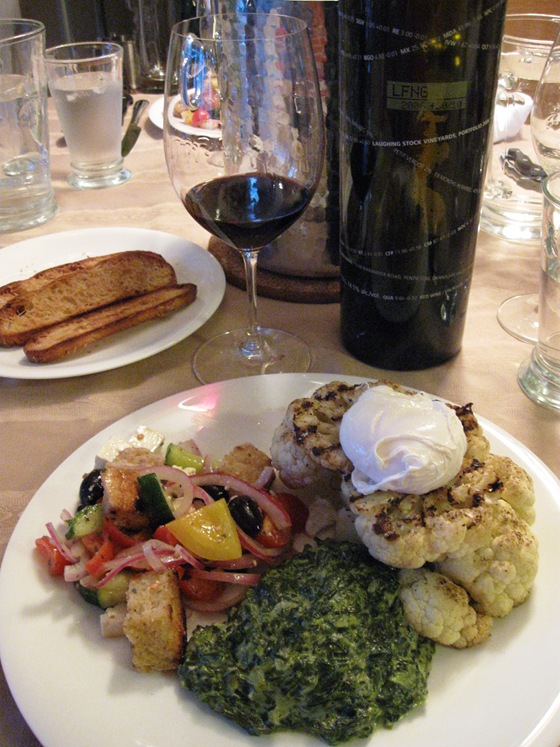 It was pointless to try hiding the statuesque magnum of Laughing Stock Portfolio lurking in the background, so into the extra-large decanter it went, with a sample glass poured for each of us straight from the bottle first. This particular 2006 vintage received a silver medal at the 2009 Canadian Wine Awards, along with a glowing 90-point review from Anthony Gismondi. Before sitting down with what sounded like a very complex entree course, we sipped our sample glasses and marvelled at the delightfully smooth textures and round berry flavours. Our host mentioned that one of his goals for our upcoming trip to the Okanagan is to acquire another Portfolio magnum (this one coming from a much-loved 2009 trip together), a wise choice given the enjoyment we were already getting out of this one!

With the Portfolio already flowing, we were soon treated to a beautifully plated hearty plate of Panzanella Salad, Creamed Spinach, and duelling steaks: vegetarians received giant cauliflower versions while the other half of the table dug into juicy Bison Ribeye. With a poached egg on top for one last flourish it was quite a sight, and the Portfolio easily stepped up to match the flavour bonanza in front of us. I’m told the hint of pepper in the wine wonderfully accentuated the Ribeye, while my own experience with the luxurious creamed spinach in particular helped cement support for acquiring another bottle at our next visit to the winery! 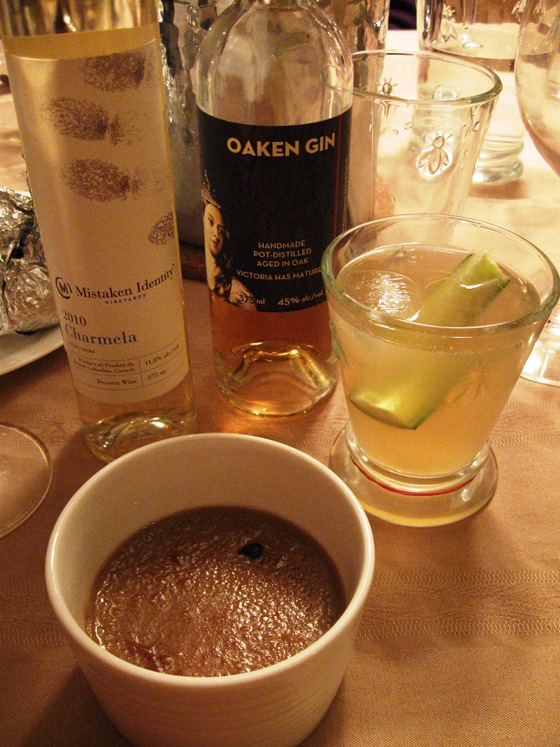 With a few leftovers helpfully wrapped up to go, it soon came time for the dessert course, which proved to be another mouth-watering delight, and one that we surprisingly hadn’t yet enjoyed together. When the torch came out it became apparent that someone had finally made Crème Brûlée! The Earl Grey-flavoured super-creamy delicacy was paired with a very refreshing Cucumber Gin Spritzer, made using Victoria Sprits’ fantastic Oaken Gin along with cucumber-steeped simple syrup, lime juice, and sparkling water.

If the Spritzer wasn’t enough we were also treated to a bottle of Mistaken Identity “Charmela”, a very creative blend of organic Chardonnay grapes and estate grown apples from Salt Spring Island. The dessert team regaled us with tales of surprisingly powerful aromas and earthy flavours when the Charmela was sampled at the winery last year, but by now those soil characteristics were substantially subdued, with only tantalizing hints remaining, alongside flavours of sweet almonds and tart apples. Just as the winery suggests, it made for a superb pairing with the Crème Brûlée, finishing the meal in satisfied style.