BC Paired Luncheon at VIWF 2014

The closing weekend of the Vancouver International Wine Festival includes numerous thematic luncheons highlighting regions or wine styles/varieties. I often favour the “BC Paired” lunch organized by the BC Wine Institute, showing off dozens of VQA wines from nearly every BC winery attending the festival. This year’s event witnessed a new venue at the Fairmont Pacific Rim, home of ORU Restaurant. A last-minute change from the Restaurant itself to an upstairs ballroom did nothing to diminish the menu from Executive Chef Darren Brown. As it turned out, the Fairmont’s ballroom was beautifully appointed, and featured expansive views of the north shore and the sleek Convention Centre – more than sufficient for the task at hand! 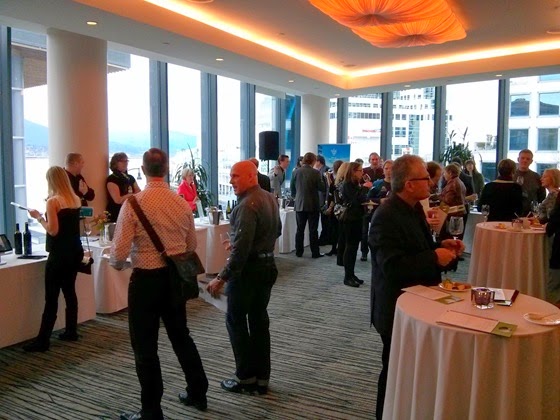 Upon arrival, my wife and I found a generous food spread in the centre of the room, with wineries wisely spaced around the perimeter. A very active risotto station was busily plating ramekins of seafood fennel and foraged mushroom versions. The provided pamphlet and guide included the full grazing menu (with suggested wine pairings), but to be honest I saw very little of the proffered delights: guests descended on the food with rapidity and I made the choice to focus on wine tasting in the limited time available. Quick passes gave me a chance to enjoy at least a couple of the many delicious table hors d’oeuvres: Truffled Bruschetta, Roasted Baby Beet Salad, Crostini Bufala Margherita, Wild Mushroom Arancini, Duck Confit Rillette, Dungeness Crabcake, Braised Ancho Shortrib, Qualicum Beach Scallop, Sake Miso Sablefish, and Cotechino Meatballs were snatched up with vigour by those in attendance. Oft-refreshed artisanal cheeses provided for additional pairing opportunities, including riches from Moonstruck, Salt Spring Island, Natural Pastures, Golden Ears Cheesecrafters, and Poplar Grove. 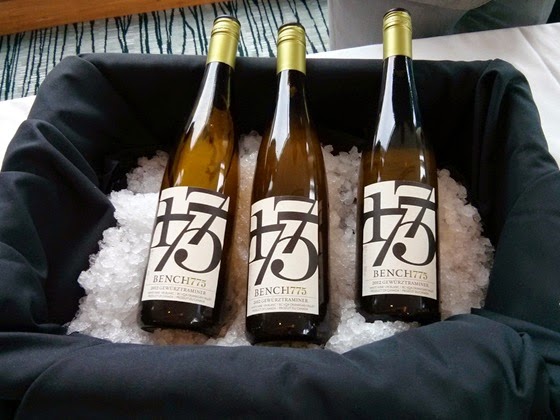 I admittedly didn’t make it to all of the twenty-four tables – representing nearly every one of the twenty-seven BC wineries attending the Festival – and took an approach much more random than methodical. Each winery was pouring two wines, often unique from those poured in the afternoon and evening Festival Tasting Room sessions. Overall the focus seemed to be aimed more closely at value-driven, food-friendly wines, rather than the rarities and icon bottles opened in the Tasting Room. A couple of 2012 Gewurztraminers started things off nicely, including a surprising and quite tasty lime-dominated, creamy version from Bench 1775. Nearby, Haywire took aim at the perfumed side of the grape, and their clean and delicate Gewurztraminer helped illustrate the range of styles that can be produced. 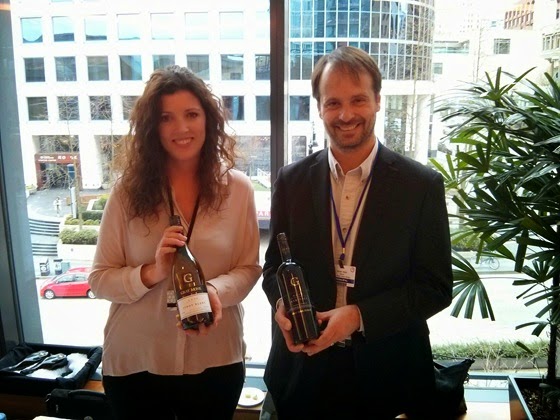 At the Gray Monk table family proprietor Steven Heiss was pouring a pair of opposites alongside Charton-Hobbs Representative Taliesyn Huxtable. The winery’s 2012 Pinot Blanc was showing crisp orchard fruit flavours and a hint of light spice on the fuller body. With 15 grams of residual sugar it’s not dry, but bright acidity ensures balance. At more than twice the price, the 2010 Odyssey Meritage ($35) represented the other end of the spectrum. The big red comes courtesy of grapes from Harry McWatters’ Black Sage Road vineyard, and is pleasantly approachable now, with smooth dark fruit and hints of red bell pepper and even some black pepper. Since a direct comparison to Gray Monk’s Meritage was mere steps away we tried out Jackson-Triggs’ 2010 Sunrock Meritage, from vineyards even further south. The Osoyoos Merlot component jumped out immediately with the olive aromas I tend to associate with the region; and burnt sugar flavours yielded a sweeter palate than Gray Monk’s version.

A full Merlot from further north, on the Golden Mile side of the valley, came in the form of Hester Creek’s 2011 Reserve. The block-specific designation that began with the winery’s Cabernet Franc has been extended to the Merlot, which comes from Block 2, planted in estate vineyards nearly four decades ago. Aromas of toast and jam led into a smoky palate showing the prominent use of oak I’ve come to anticipate from Hester Creek. To refresh our palates we sipped from the winery’s 2010 Character White, a proprietary blend that surprised us with a fuller palate than expected given the light, tropical nose. 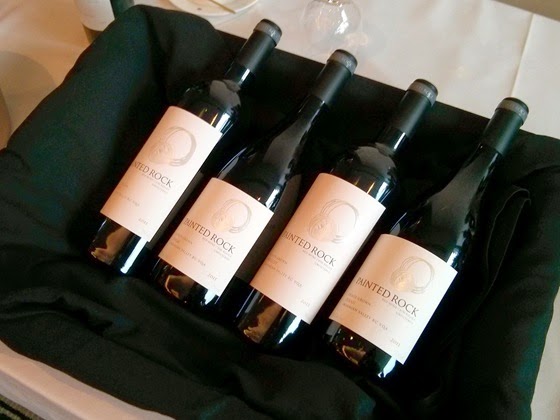 By the entrance to the room was John Skinner, proudly showing off his brand new 2011 red wines from Painted Rock. While John was only pouring his Merlot and Syrah, I recently got the chance to taste the new Cabernet Sauvignon and Red Icon as well. All the 2011 wines possess a bright, youthful acidity that amplifies the fruit flavours. The Merlot’s expressive, fruity nose flows nicely into fresh blueberry flavours, and the Syrah impressed us with particularly fresh fruit – cherries and red plums – followed by leather, toffee, and white pepper characteristics. (Tasting the Cabernet revealed elegant leather and mint, and the Red Icon is enjoyably rich and spicy, led by 30% Malbec in this annually-unique blend.) The manageable tannins throughout Painted Rock’s 2011 wines make them drinkable already while the fruit is so expressive, but the acidity promises healthy aging potential to allow for the development of additional complexity. 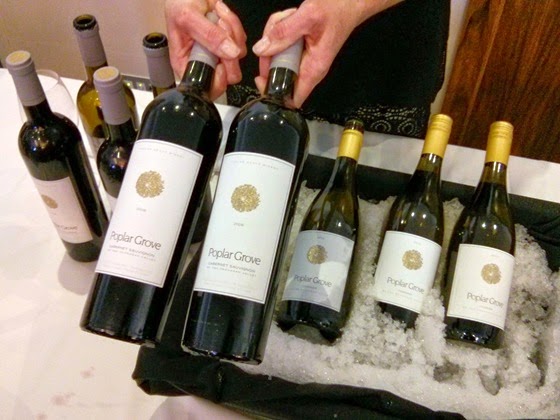 On the other side of the room Poplar Grove was showing off some rarities, in contrast to the more widely available wines on offer at most of the tables. The 2012 Viognier (soon to be replaced by the 2013 vintage) was one of the highlights of the event for us, with mouth-watering tropical, vanilla aromas and a rich citrus palate. It was actually challenging to pick out many unique characteristics from this well-rounded, mouth-filling wine; we just knew we wanted more – too bad it’s winery-exclusive (with just 400 cases produced)! Similarly challenging to acquire is the 2009 Cabernet Sauvignon, which showed deep, dark fruit flavours of raisins and dates. Despite its rusty colouring the wine could benefit from additional aging given still-noticeable tannins – alcohol approaching 15% will certainly help to preserve this big wine for years to come. 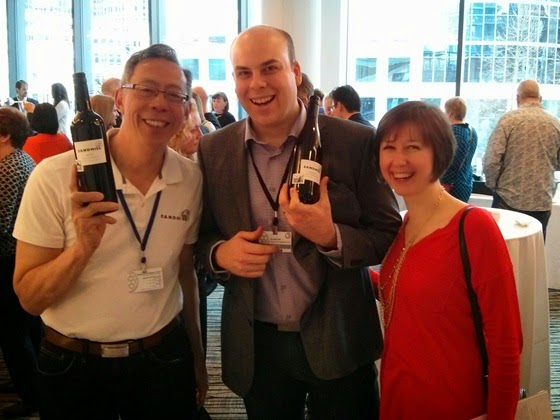 At the nearby Sandhill table Winemaker Howard Soon was more than happy to pose for a few pictures, while pouring juicy 2011 Merlot and a big, flavourful 2012 Pinot Gris. The well-rounded white had layers of tree fruit flavours covering apple, pear, and peach, plus notes of fresh grapes. Of particular reason to rejoice was the news that Sandhill will be opening an expansive new tasting room in a few short weeks. The dark, cramped boutique attached to the Calona Winery in Kelowna will be replaced by a newly renovated space next door that will do wonders to better show Howard’s many superb single-vineyard wines. Renderings show an open, airy room with natural light and original wood beams, plus much improved exterior signage – I can’t wait to visit in person soon! 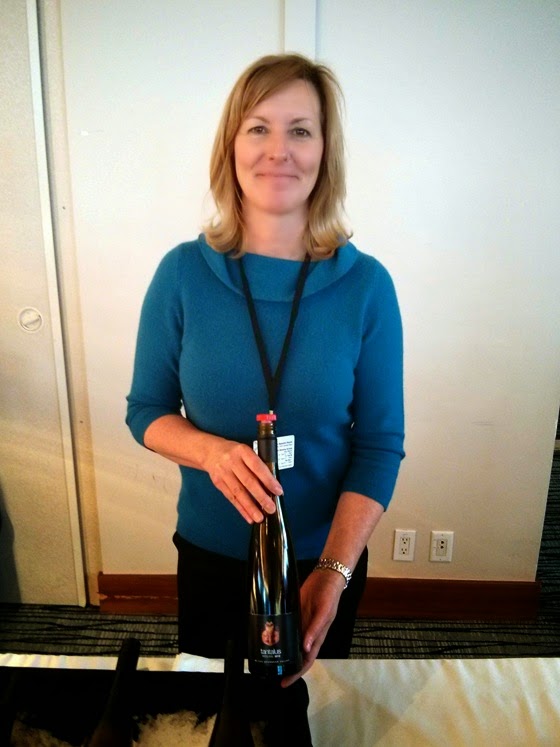 From another Kelowna champion, Tantalus’ General Manager Jane Hatch had the winery’s internationally celebrated Riesling open to share. The 2012 vintage was showing just a hint of earthy petrol on the attractive nose, with flavourful lime and hints of vanilla following through on the palate. After a long, clean finish we happily tried out the 2011 Chardonnay as well, where the creamy palate and McIntosh apple flavours made for similar satisfaction. In discussing the upcoming 2011 Old Vines Riesling (enjoying limited pre-release at the Festival) Jane shared that it was – in her opinion – the best vintage ever of this extremely popular wine. Even though the Old Vines version is typically released two years later than the regular Riesling, it can still improve with additional bottle aging, up to several years (from vintage) according to Jane. I was certainly left pleased to have already obtained a couple bottles from the on-site Festival store. 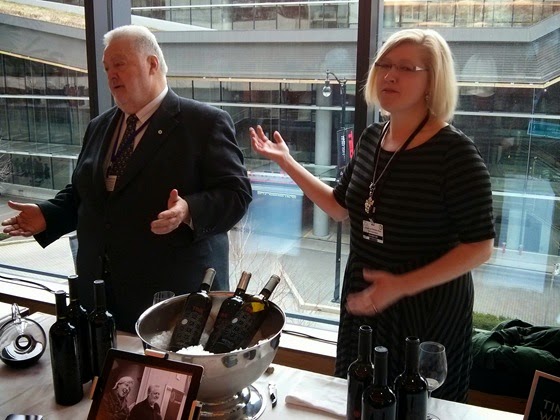 While many northern hemisphere wineries, BC included, poured their 2012 whites at the Festival, Harry McWatters risked bottle shock and opened his TIME Estate Winery 2013 White Meritage. The blend of Sauvignon Blanc and Semillon appeared no worse for wear despite being only five months from harvest (and just a few weeks in bottle), with creamy vanilla and grapefruit on the nose, and tropical fruits like starfruit and kiwi coming across on the palate. At Harry’s side was his daughter Christa-Lee, helping to show a slightly more mature release in the form of rich 2011 Red Meritage (released last year). A fruit-forward nose and bright palate trended towards darker fruit after more consideration, while youthful tannins make for myriad food pairings and/or several additional years of potential aging.

Before departing for the afternoon Festival Tasting in the Convention Centre we made sure to stop by Tinhorn Creek’s table. Viticulturist Andrew Moon was happy to pour samples of the winery’s 2012 Pinot Gris, just as the new 2013 is appearing on store shelves. The additional age on the nicely dry 2012 vintage hasn’t diminished it whatsoever, as the wonderful creamy texture remains in force – thanks to 30% Malolactic fermentation and two months of lees stirring. Fortunately, precisely the same treatment was applied to the 2013 vintage, which should be equally enjoyable over the coming months. We couldn’t resist a few sips of 2011 Cabernet Franc either, released last August and currently a rarity in local stores. I always enjoy the refined flavours of Winemaker Sandra Oldfield’s Cabernet Franc: red berry fruit (think raspberry seeds) with hints of leather, toast, and even some licorice.

There were many more wineries and wines present from which we didn’t manage to sample, but I’m glad to have made it to some long-time favourites, and to have caught up with some old friends. Included among those people are the great Communications and Marketing staff at the BC Wine Institute, who have graciously hosted me at the BC Paired Lunch for three years running. Many thanks to the Wine Institute, the Wine Festival, and to Heth PR for facilitating my media pass to the Lunch!