Members of the BC Wine Appreciation Society enjoyed an intimate and informative tasting of the Naramata Bench wines of Serendipity this week. Proprietor and Winemaker Judy Kingston travelled to Vancouver with her daughter and “Second-in-Command” Katie to share a selection of finished wines and fresh tank samples with a crowd of enthusiastic learners. Like probably many of the guests in attendance I wasn’t too familiar with Judy’s wines, seeing as her first estate vintage came from 2009, and her 2010 reds are only just being released now. A relatively small production quantity of 2,500 cases (and growing) might mean this little winery beside Therapy Vineyards could be easily missed, but having tasted the wines in detail I for one will be actively seeking them out going forward!

To introduce the crowd to Serendipity and her winemaking philosophy Judy began with what is likely an oft-told – but no less fascinating and inspiring – story. After years as a professional attorney in Toronto Judy was forced to give up law permanently after a terrible car accident brought on memory loss, in addition to crippling bodily injuries. Judy’s brief referral to “learning to walk and talk again” obviously belies the intense struggles she must have overcome. However, as Judy described it, she would have never again felt confident counselling a client if she couldn’t be sure she hadn’t forgotten some key law, rule, or legal precedent – the “unknown unknowns” as it were. Neurosurgeons suggested that her future career options should exclude any newly acquired skills, but her only other expertise was in cooking, having past training as a professional chef. Unfortunately, her injuries would forever prevent her from long periods of time standing, so even cooking was now off the list.

A trip to the Okanagan with early retirement on her mind is what ultimately brought Judy into the world of winemaking, when a jaunt through Naramata seeking a route north to Kelowna (which she discovered is impassable to most vehicles) led her past an orchard for sale. Realizing that winemaking was “safe” led to the snap purchase – after all, if she forgot something while winemaking the worst that could happen was terrible wine! That serendipitous moment inspired the winery’s ethos, and the apples and cherries were replaced with vines starting in 2006, first harvested in 2009, followed by Serendipity’s official opening in 2011. 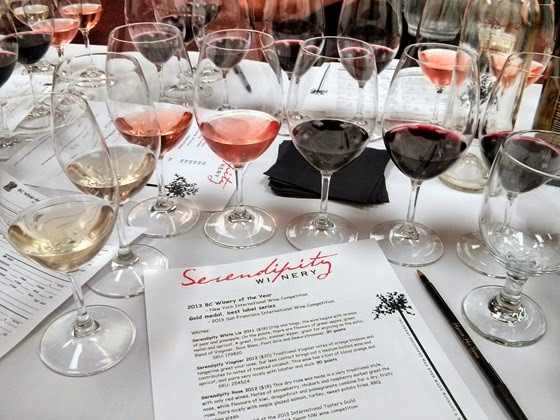 To introduce us to her winemaking approach Judy had brought her 2012 Viognier along with tank samples of the 2013 vintage. Like all of her wines, the Viognier is finished completely dry, to provide for ideal food pairing opportunities. (For the same reason, none of the white wines spend any time in oak.) The 2012 showed that purity of fruit quite well, with pear and orange blossom flavours and a long finish. The 2013 tank sample amplified every aspect, with a gorgeous nose of floral stone fruit and a rich palate of white peach and tropical hints leading to an even longer finish.

The grapes in Serendipity’s vineyard are cropped quite low, far below industry averages, at 2.5 tons per acre for whites, and a mere 1 ton for reds. Judy’s insistence on such small numbers makes it virtually impossible for her to purchase grapes to expand her operations – growers almost always insist on payment by the ton, not by the acre, and won’t crop to her standards. I have heard similar tales from other exacting wineries, and the ultimate solution is to slowly, steadily add to one’s vineyard holdings to allow fully control. Fortunately, thus far Judy has managed to borrow access to vineyard land from retiring farmers who still want to retain the property rights, giving her nearly complete control over vineyard operations. 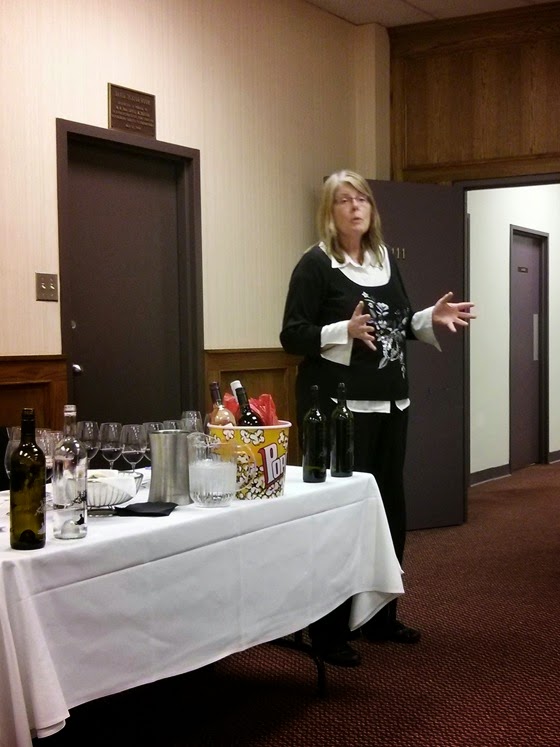 While Serendipity may be boutique in size, Judy has thoughtfully incorporated several key grape varieties, which she has grown from “infancy” in her own nursery. In fact, during the first harvest the thriving nursery was nearly forgotten about. In yet another serendipitous moment that diverse collection of red grapes was ultimately made into a Rosé. As with the Viognier, Judy was pleased to share with us the 2012 Rosé, plus a 2013 tank sample. From a blend of Merlot, Cabernet Franc, Malbec, Pinot Noir, and Syrah we enjoyed earthy, strawberry-rhubarb aromas and a clean, red berry and pomegranate palate. The 2013 sample was very similar, just that much fresher and livelier. By blending so many grapes to yield multiple flavours Judy ensures versatility, in that no one characteristic dominates any potential food pairing, and the wine works with a range of cuisines.

As we enjoyed the wines Katie also chimed in on occasion with her unique perspective. Now a vested member of the winery team – having abstained from a career in law – Katie has been working closely with her mother since finishing her undergraduate education in biology. At one point Katie took pleasure in telling us about her being roped into facilitating natural pest management during her summer visits, as the winery was being established. While her peers were enjoying Naramata beach parties Katie was spending her evenings in the vineyard alongside her mom, manually “squishing” cutworms! (Judy strives to avoid spraying her grapes, in order to retain beneficial insects.) At Katie’s urging, they tried an alternate remedy for cutworms she’d read about – spreading hot sauce around each vines’ base. Unfortunately an experiment indoors with some live specimens showed the worms simply lapped it up without harm, so back to squishing they went! 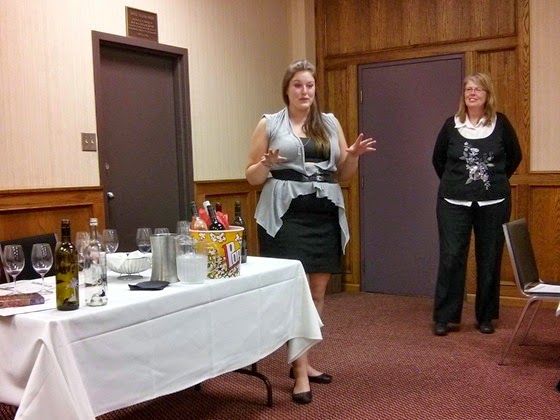 Although Serendipity also produces a Sauvignon Blanc varietal wine and a white blend (called “White Lie”), we spent the remainder of the evening focusing on the many reds on hand. Originally Judy had intended on producing only one red Bordeaux-style blend, but that clearly didn’t pan out, as we had no less than three blends in front of us! The superb value “Red Handed” 2010 is a Meritage blend with the addition of Syrah and Pinot Noir – all of the red grapes Judy grows. I thoroughly enjoyed the delicious aromas of milk chocolate, cherries, and vanilla, which led superbly into flavours of berry fruit and chocolate. Given that this newly bottled wine will retail for only $18 it seems like a steal!

The “Devil’s Advocate” 2010 came next, and again centered on a red Meritage blend with a little something extra. In this case the extra comes from 30% Syrah, leading to toasty aromas of leather and eucalyptus. The bright, peppery palate was very tasty – and like the Red Handed seemed almost sweet from the intense fruit. Judy hasn’t shied away from entering her wines in competition, and the Devil’s Advocate has achieved some prominent medals, including Silver from the Canadian Wine Awards, All Canadian Wine Championships, and the San Francisco International Wine Competition.

Two mini-verticals of newly released and upcoming reds continued the excitement, beginning with the original intended red blend, “Serenata”. Although Serenata 2008 was one of Judy’s very first wines, it was the 2009 that included her first estate grapes, and which we were set to enjoy. This straight red Meritage includes some other Naramata Bench grapes as well, and came directly from Judy’s library – only 21 cases were produced! The complex palate showed more tannin and darker fruit than the earlier two reds, but all in superb balance with acidity and oak. This was followed up with the new 2010 Serenata, featuring Serendipity’s special Calgary Stampede bottle design (including Isaac Newton wearing a cowboy hat). After the Devil’s Advocate was featured in the Stampede’s wine program last year, the Serenata is headed there for 2014. Calgary restaurant-goers can look forward to another finely balanced wine with a delicious, fresh nose and great food-friendly acidity. Fortunately 450 cases were produced this time around! 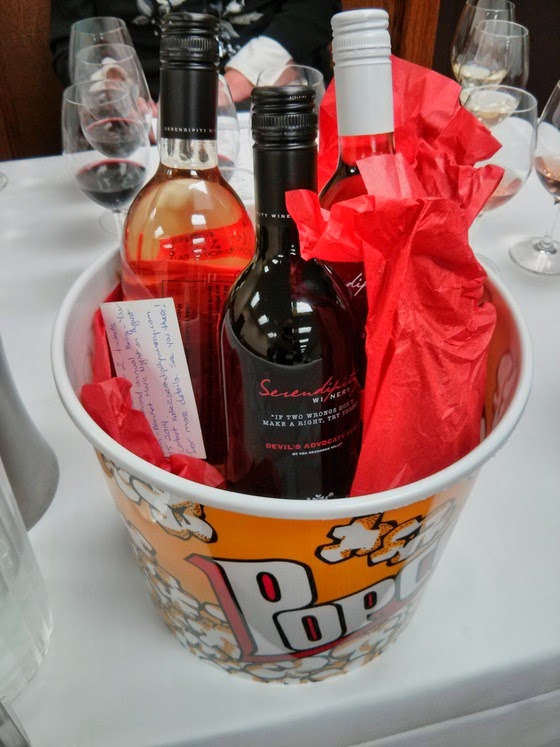 Joining the Serenata in Calgary will be the 2010 Syrah, a smooth, spicy wine with a hint of smoke to ensure ideal barbecue pairing. The Syrah was our final wine, preceded by the 2009 vintage of the same, a similarly spicy, ripe treat showing hints of brown sugar on the palate. Only 40 cases of 2009 Syrah were produced, but Judy managed to increase production to 95 cases in 2010, still a meagre amount by any standard, so it likely won’t last long!

So many wonderful wines and stimulating stories provided an excellent introduction to an up-and-coming winery. If you couldn’t make it to the tasting be sure to keep your eyes peeled for Serendipity at your nearest wine store, or visit Judy, Katie, and the rest of their growing team in Naramata someday soon!