BC Sparkles at VanWineFest

There was no mistaking that France was the theme region at this year’s Vancouver International Wine Festival: dozens of spectacular Champagnes on offer provided for ideal synchronicity with the varietal focus on sparkling wine. I certainly enjoyed tasting through the wares of France, including delicious Champagne and Cremant, plus some spectacular gems from the Rhone in particular. My pass for all three days of the public Tasting Room allowed exploration of every international wine region represented, with special attention paid to the many wonderful wines from right here at home. With the focus on bubbly, at least nine of the twenty-seven BC wineries present in the Tasting Room had something to contribute in that respect – I tasted seventeen different sparkling wines in the BC section alone! 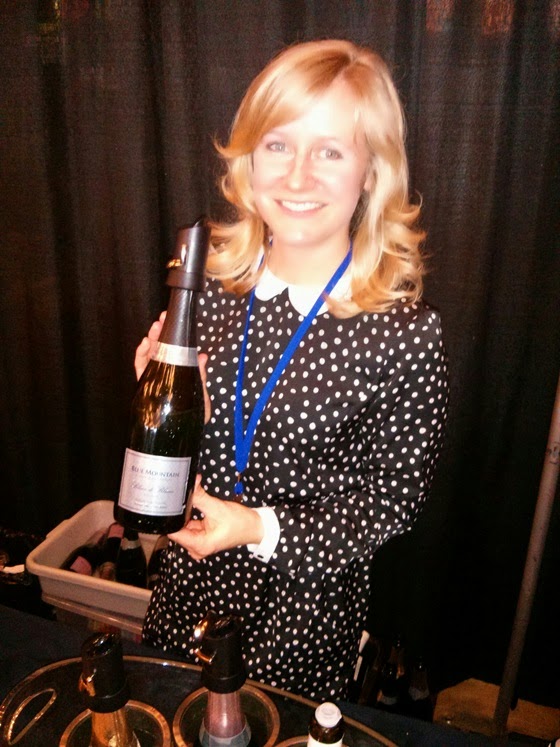 The fun started with one of BC’s most venerable sparkling wine producers: Blue Mountain Winery of Okanagan Falls makes four different bubbles as of their recent introduction of two new vintage wines to an already-impressive range. Sales & Marketing Manager Christie Mavety was excited to be pouring her family’s “Gold Label” (Non-Vintage) Brut to start. This bottle is a feature on wine lists across the province, and the bright flavours, yeasty mousse, and long finish make it food friendly in almost any context. The 2009 Rosé Brut particularly impressed, with a wonderfully fresh and clean strawberry palate. Lastly, for the afternoon Trade Tastings Christie shared the 2006 Blanc de Blancs, a softer, more mellow and thought-provoking wine showing layers of apple flavours and even further food-pairing opportunities. The complex 2005 Reserve Brut is already sold out, and hence unavailable at the Festival, but would complete the quartet – fortunately I have one precious bottle at home to enjoy in the future! 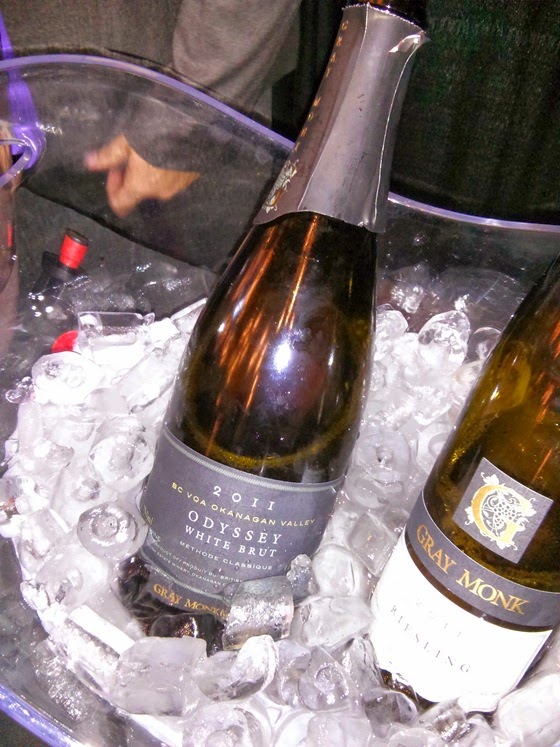 Moving down the alphabetically-sorted row of wineries I soon came upon the table of Gray Monk, another family-owned winery which has included sparkling wines in their broad portfolio for some time. Dawn Heiss was behind the table introducing guests to the new vintage of the winery’s Rosé Brut, a blend of Pinot Noir and Pinot Meunier with additional Gamay Noir, produced in the traditional method. The 2010 Rosé comes across on the sweeter side, but still food-friendly with a creamy palate and a superb value price of only $20. Partner to the Rosé is the White Brut, a blend of Pinot Blanc, Chardonnay Musque, and Riesling, still produced in the traditional method using secondary bottle fermentation. Expecting a sweeter wine I was quite surprised at the dry, crisp character in the glass, with clear contributions from the Riesling in particular. Higher acidity and lower sugar than the Rosé make for a very versatile wine – and it’s often found in magnums! 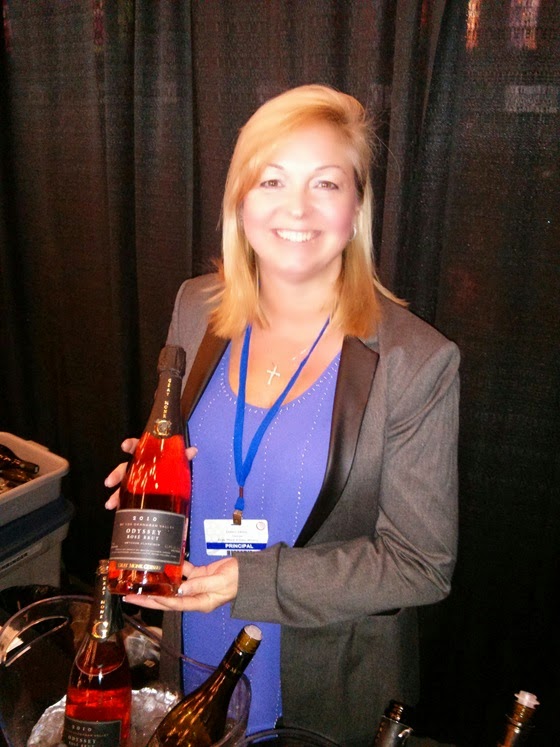 Just around the corner Summerland’s Okanagan Crush Pad was represented by their house winery, Haywire, pouring samples of the slick, crown-capped, traditional-method bubbly “The Bub”. The brand new 2012 vintage was being flaunted by one of OCP’s consulting winemakers, Matt Dumayne, with whom I was quite pleased to catch up (since last fall’s BCWAS Perseus Tasting) and compliment the excellent wine he was pouring. In retrospect, this Pinot Noir & Chardonnay blend was the most fruit forward BC sparkler I tasted at the festival, and I look forward to enjoying more than a few bottles over the course of the next year! (A Rosé version made using red-wine dosage should be equally good, albeit harder to acquire, with only 100 cases produced.)

At the other end of the size spectrum was Jackson-Triggs, back at the Festival after a year off in 2013. Amongst other wines, the “Entourage” Sparkling Chardonnay was available for tasting, remaining consistent with my last experience tasting the 2008 vintage a couple of years ago. Although crisper than I expected given my bakery-fresh recollection, the newer 2009 vintage has retained the bready aromas and baked fruit flavours I enjoyed the last time. 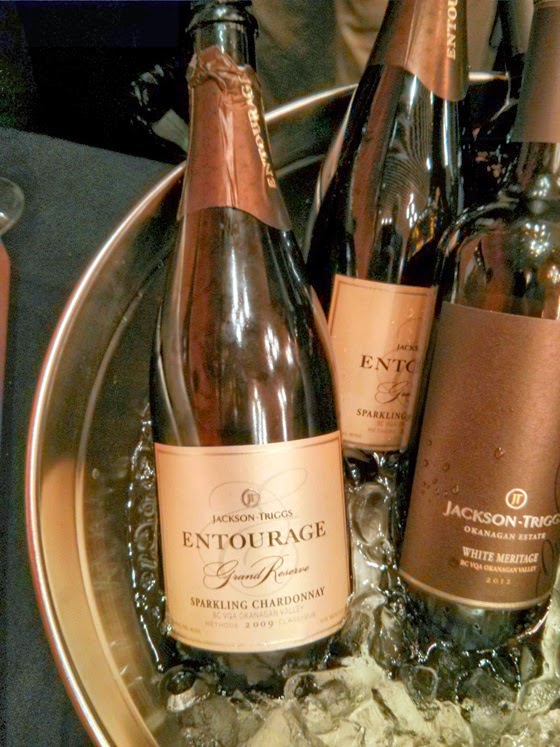 The Naramata Bench was represented in the sparkling department by Lake Breeze, pouring their vibrantly-named “Zephyr” Blanc de Noir, a traditional method bubbly from the winery’s very good Pinot Noir grapes. A nose of sweet strawberries and a tart, lively palate made for an easy-drinking, enjoyable wine. Most guests would be forgiven for their surprise that Lake Breeze even makes a sparkling wine, given the small quantities produced, and the fact that it appears to be sold out at the winery! My compliments to Lake Breeze for dipping into their library in order to bring the wine to the Festival, and to make it available for sale in the on-site store.

From the other side of Okanagan Lake, back in Summerland, Sumac Ridge’s “Steller’s Jay” sparkling house was naturally present, with all three wines currently produced on offer. As corporate owner Constellation Brands did with Sumac’s Black Sage Vineyard line of wines, Steller’s Jay is now a seemingly independent brand, although lacking a web presence thus far. The reliable, thoroughly-awarded Brut maintained the traditional method wine’s solid reputation, with a clean, refreshing palate on the most recent 2008 vintage. Non-vintage Sparkling Gewurztraminer was an entertaining treat, showing soft fruit and a sweet finish – I’ve heard it suggested as a great sushi pairing. Finally, the 2005 “Pinnacle”, a Blanc de Noirs aged en tirage for four years came across as more of a complex, solo sipper. It struck me as lower in acid than the Brut, but drier as well to maintain a good balance, with generous brioche and apple flavours. 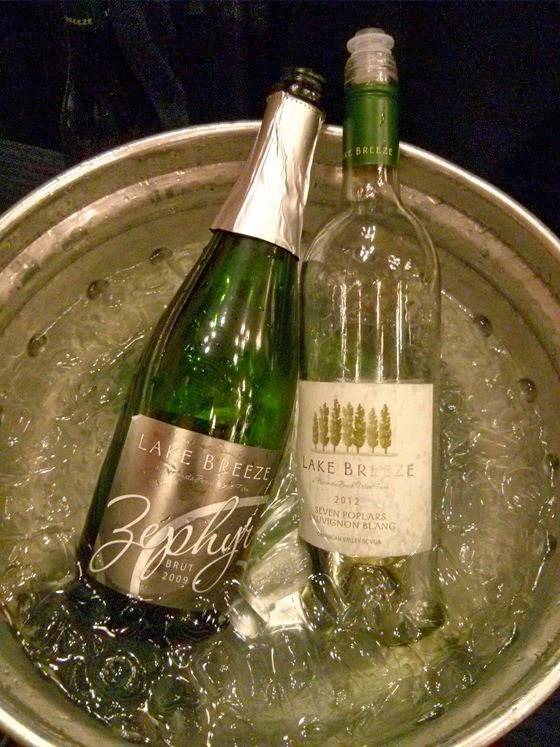 Steller’s Jay was joined in the big bubbly players category (alongside Blue Mountain and Gray Monk) by Summerhill, pouring no less than four different sparkling wines – and only sparkling – at the Festival. Although the Kelowna winery produces a full range of white and red table wines, they took the varietal focus quite seriously indeed and brought along non-vintage Cipes Brut (white and Rosé versions), an early-release 2008 vintage Blanc de Noirs, and the epic 1998 Cipes Ariel. The standard Cipes Brut is a blend of Riesling and Chardonnay, somewhat sweeter than Gray Monk’s similar wine, but just as refreshing. The Cipes Rosé, from 100% Pinot Noir, was recently named amongst the Top 10 wines at the 2013 Effervescents du Monde competition; I certainly enjoyed the juicy berry fruit flavours. The Blanc de Noirs is not yet formally released, and came bearing a temporary but straightforward label, plus a complex and mature flavour profile I look forward to enjoying again upon release. Lastly, I was very excited to try my first sip of Cipes Ariel, which at $85 after 15+ years of age is not too common, nor opened too often: a beautiful amber-gold straw colour revealed an intriguing nose and palate that seemed almost savoury in nature, but ultimately inspired me to liken it loosely to “sparkling Madeira”! 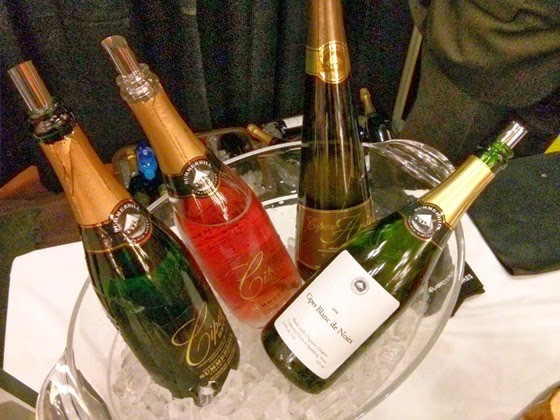 To cover every BC sparkling wine available I made sure to stop by two more tables. At the first, in between Steller’s Jay and Summerhill, Stoneboat Vineyards was pouring the second release of their “Piano” Brut, a unique Charmat-method wine produced from Pinot Blanc and Muller Thurgau grapes. I’ve tried the wine a few times since the first release at last year’s Wine Festival, and this bottling seemed drier from what I could recall. General Manager Tim Martiniuk assured me that it contains the same proportion of residual sugar, but this batch was aged a bit longer than the first, and hence the immediate fruit flavours are slightly tempered.

At the very end of the BC section was young Vancouver Island winery Unsworth Vineyards, established in the Cowichan Valley in 2009 by Tim and Colleen Turyk. It’s rare that such small (but growing) wineries as Unsworth formally attend the Festival, given the nearly prohibitive costs. As a result, I was excited to see them, particularly given the presence of their 2010 “Cuvée De L’Ile” traditional-method Blanc de Noirs. Only 355 cases have been produced of this Pinot Noir-based wine, aged on the lees for two years, and now ready to enjoy. I enjoyed the vibrant nose and yeasty palate, which seemed to lean towards an old-world French style (contrary to some of the lighter, more fruit-forward wines from elsewhere in BC). With so much great French Champagne in the room just steps away I’m sure Unsworth found themselves in great company!

Having enjoyed a delightful range of sparkling styles and flavours I couldn’t help but consider the wines and wineries missing from the Festival. Only a handful of local wineries attend consistently every year, as doing so represents a significant investment, so several notable BC sparkling wines were missing in action. Most immediately apparent was the lack of Road 13’s celebrated Sparkling Chenin; the Golden Mile winery had just attended last year and so quite fairly opted out this year. Blasted Church was also unable to attend, but their new traditional method “OMG” sparkler would have no doubt impressed the crowds. I also sorely missed some of my favourite frizzante-style wines, including Orofino’s Moscato, and the popular “Integrity” and “Confidence” from Summerland’s 8th Generation Vineyard. Ironically, while Kelowna’s Tantalus was in attendance, they simply didn’t have enough of their sold out Old Vines Riesling Brut to commit to the Festival. Fortunately, the Regional Tasting Station operated by the BC Wine Institute was pouring the Riesling Brut, along with other rarities from wineries unable to attend, including Backyard Vineyards’ Blanc de Noir, the finely-crafted Sparkling Chardonnay from Bella Wines in Naramata, Noble Ridge’s “The One”, and Sperling Vineyards’ vintage Brut from Kelowna.

I stopped by the BC Regional Station several times to enjoy the ‘bonus’ wines as they were rotated through. With two dozen BC sparkling wines available to sample throughout the Tasting Room and nearly one hundred more from across the world I was kept busy enlightening my palate. My thanks to the Festival management and to the very competent team at Heth PR for facilitating my media credentials and access to the Tasting Room. I’m already eagerly awaiting the 2015 Festival, which celebrates the wines of Australia and a focus on what should be some superb local and international Syrah!