This week marked yet another milestone for one of British Columbia’s most pioneering wineries. Invited media and the many friends of Fort Berens Estate Winery gathered in Lillooet to celebrate the official grand opening of the new tasting room and production facility. Still sporting that new construction smell, the delightfully orange-accented winery founded by Dutch immigrants Rolf de Bruin and Heleen Pannekoek is set to begin initial crush within days, as the 2014 harvest kicks off. After a few years successfully partnering with Okanagan Crush Pad for production assistance, the ambitious ownership team of Fort Berens is excited to break in their very own winery, and to celebrate the progress and promise it denotes. I was fortunate enough to board a bus bound for the celebrations during the early hours of the morning, alongside two dozen other local wine writers and enthusiasts. Our host and guide on the five hour journey north from Vancouver through the Fraser Canyon was Heleen herself, fresh from Wednesday’s VQA fall trade exhibition and the evening “Chef Meets BC Grape” food and wine tasting. Event organizer Kim Lawton had prepared a fully involved 15-hour day that began with a stop in Hope for morning refreshments at newly opened restaurant 293 Wallace. Chef Hiro Takeda was happy to provide mimosas and locally-sourced yogurt parfaits while conveying his excitement at being part of the town’s renaissance. The community is no longer content at being merely somewhere else’s stopover, and is pushing hard to rebrand as a worthy top-tier recreation destination. Over finely-crafted lattes from Blue Moose Cafe across the street we reviewed the bevy of information provided by AdvantageHOPE, and admired the enthusiasm and devotion of small businesses that energize communities. 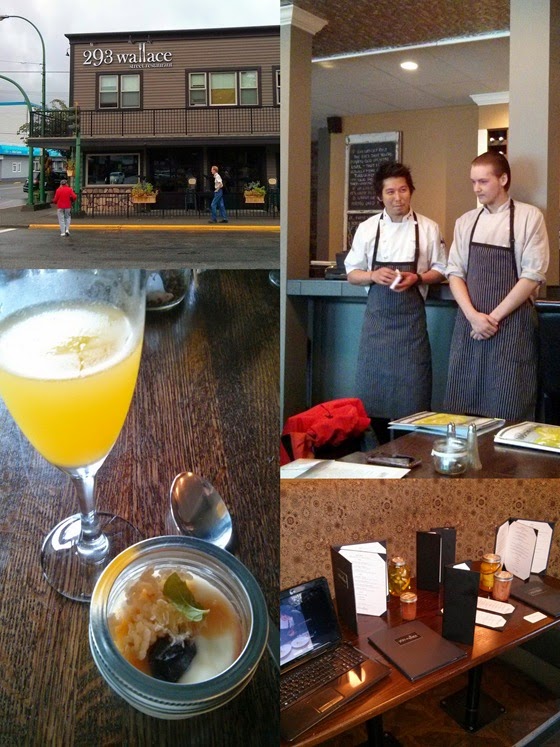 Travelling along the rugged Trans-Canada Highway I admired the stunning canyon and mountain views for the first time, in one of BC’s most historic valleys. With the powerful Fraser river a constant companion we observed noticeable changes in flora as the local climate dried out further north. Heleen kept us informed with an impressive body of local knowledge: the fact that she could seemingly perform as a professional tour guide for the region after just five years in Canada emphasizes the local commitment of this winery team! Outside Boston Bar, we passed Fat Jack’s Diner at The Mighty Fraser Motel, where our upcoming lunch originated via Chef Todd Baiden, a Vancouver transplant who formerly operated underground restaurant 12B. In Lytton we crossed the Thompson River and witnessed with fascination its clear blue waters merging into the muddy Fraser, before eventually crossing “the Big Slide” at a point where Highway 12 is pared down to one lane in an active slide zone. Some nerve-wracking moments ensued as we traversed this section in a massive coach bus with the steep cliff edge on one side and the unsteady rock face on the other, barely held back by cables and fencing. 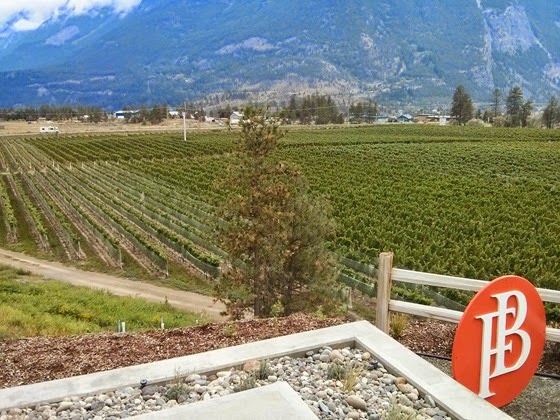 As we entered the outskirts of Lillooet Heleen pointed out some of the viticultural history of the region – experimental vineyards planted over the course of The Lillooet Grape Project initiated by former Mayor Christ’l Roshard. Weather tracking data gathered during that project confirmed the suitability of Lillooet as a grape-growing region, prompting Rolf & Heleen to establish Fort Berens as the first commercial vineyard (and now winery). At the intersection of Highways 12 and 99, we caught our first glimpse of the precise green rows and manicured vines we had come to see. Awaiting our arrival under a white tent was the full winery team, plus a second busload of visitors from the Okanagan, digging in to Chef Baiden’s generous tapas-style lunch. Along with cheese and charcuterie trays, there were several specific wine and food pairings, including creamy seafood soup shooters with balanced 2013 Chardonnay, quail skewers with fruity, silky 2012 Pinot Noir, ravioli with bright, ripe 2012 Cabernet Franc, elk roundels with rich 2012 Meritage, and apricot tarte tatin with clean, luxurious 2013 Late Harvest Riesling. 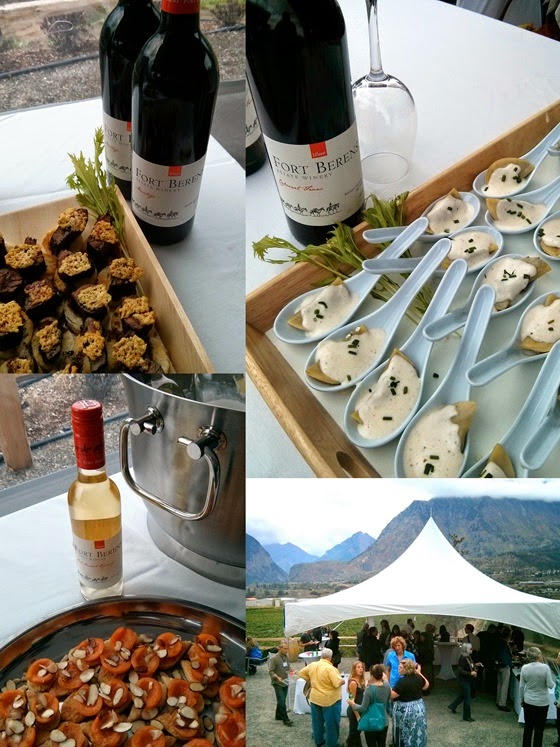 With more than enough to eat and drink we sat back to hear Heleen, Rolf, and their business partner Hugh Agro speak to the history and aspirations of this exciting venture. To recognize the site’s former use as an actual trading fort (built by the Hudson’s Bay Company in the nineteenth century), the three proprietors raised a flag in lieu of a more traditional ribbon cutting. Fortunately I had retained a little wine in my glass and was able to join the toast that Harry McWatters (the winery’s strategic consultant) led to congratulate the team. Harry’s presence (including his provision of red grapes from his Black Sage Bench Sundial Vineyard) illustrates Rolf and Heleen’s competence in cultivating lasting partnerships and friendships in the local wine industry: legendary viticulturist Dick Cleave also came on board as an early consultant, and Kenn Oldfield of Tinhorn Creek happily serves on the winery’s board of governors. 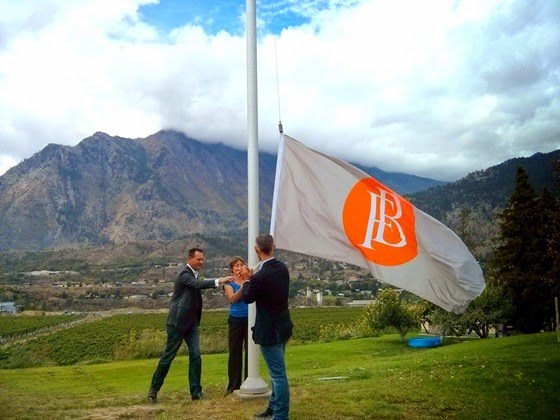 Having taken care of some of the more pressing tasks (lunch included), it was finally time for us to explore the vineyards and winery! Small groups set out to learn more about what makes the new Fort Berens tick, with exciting questions and answers from those involved. To explain the design principles and practical aspects behind the attractive new building, Toronto-based architect David Agro was present in person. The winery and tasting room – best admired from Fort Berens’ own website – shows off clean lines, natural materials, and practical character that makes for an inviting venue with added value beyond winemaking: a wedding has already taken place on site. Expansive and revealing views of the tank room and production facilities will allow customers an intimate look inside the winery – which keeps pressure on the winemaking team to keep everything spic and span! 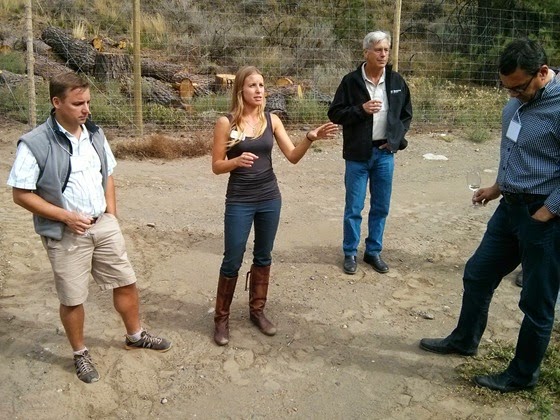 Walking a short distance down to the vineyard we heard from new Vineyard Manager/Viticulturist Megan DeVilliers, who is tasked with shepherding twenty acres of five-year-old vines that include Pinot Gris, Chardonnay, Riesling, Pinot Noir, Merlot, and Cabernet Franc. Next door is a second plot of similar size, awaiting planting in the coming years; one can imagine her excitement at the bountiful future ahead! Equally excited, and equally new to the team is Winemaker Danny Hattingh, who was next to show us around inside the spacious, gravity-feed winery. Some of the tanks are already full with newly blended 2013 Meritage, yielding space in the barrel rooms (dual, independent white and red cellars) for the 2014 vintage. With bottle aging a goal from the very beginning, an integrated warehouse can store up to 7,000 cases of wine, leaving room for expansion (as does the over-height ceiling in the tank room). Although current plans are to produce 6,000 cases this year, the facility can yield 12,000, allowing the winery to offer custom-crush assistance to nearby vineyards as the Lillooet appellation grows more successful. 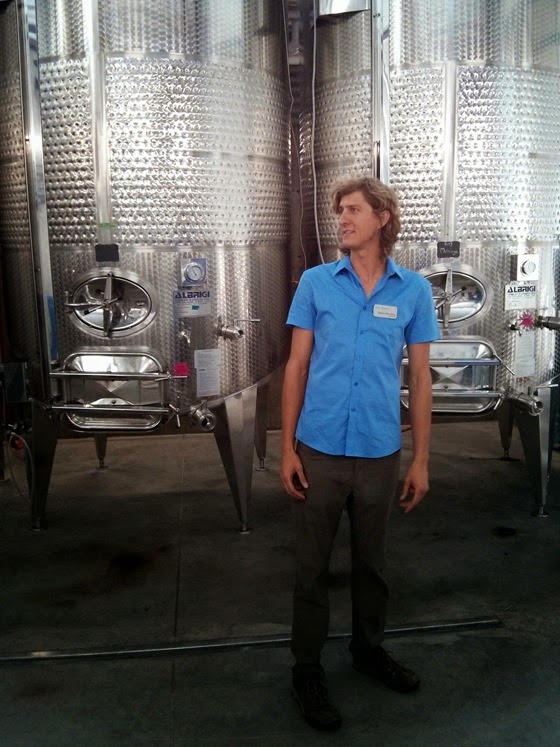 In the pristine, well-appointed Tasting Room Christ’l Roshard (the former Lillooet Mayor herself) welcomed us with a bright smile and glasses of 2012 “White Gold”, the winery’s reserve Chardonnay, of which only 200 cases were produced. Coming from fully oaked, partial malolactic fermentation of Black Sage grapes, and one year in French oak barrels, it is dramatically different from the more recent estate Chardonnay. A toasty nose leads into flavours of coconut and creamy tropical fruit with an assertive buttery texture – an exciting candidate for graceful aging. A short vertical of Pinot Noir followed: the new 2012 vintage showed ripe strawberry aromas and dark berry fruit flavours, all deliciously bright and fresh, with light tannins on the finish. Nearly five hundred cases were produced from a blend of five different clones, and the wine was awarded a gold medal at the All Canadian Wine Championships earlier this year. From 2011, the estate vineyard’s first vintage, a lighter colour was apparent with more delicate aromas. Only 65 cases were produced from yields under one ton per acre that year. The earthier palate maintained the bright fruit flavours, led by cherries and pomegranate. 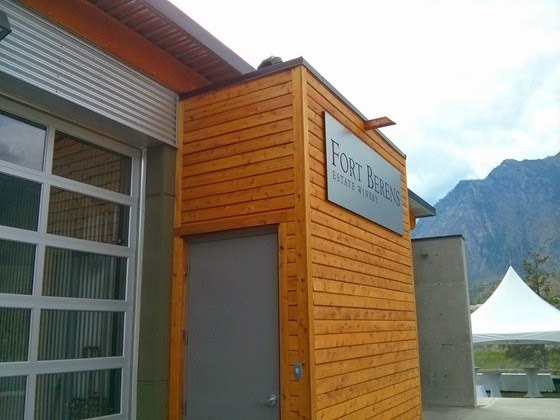 Our visit was scheduled for little more than three hours – and we made superb use of that time – but the long drive back to Vancouver soon beckoned. Amid many congratulations and goodbyes the bus slowly filled back up, and we departed via Highway 99 towards Pemberton and Whistler, with Heleen once again providing fascinating background commentary on her new home. Samples of delicious Left Field Cider and Barkerville Brewing IPA (proudly produced with Lillooet’s own HOOH Hops) helped to refresh our palates before a final stop at Whistler’s Four Seasons Resort. The acclaimed Sidecut Restaurant had prepared a preview of the upcoming Cornucopia food and drink festival, paired naturally with Fort Berens wines. Executive Chef Tory Martindale assembled a creative and precisely plated selection that included a spicy Steakhouse “Sushi” Roll, seared Sockeye Salmon Tataki, juicy Crispy Prawns, rich Goat Cheese Lollipops, and Royal of Foie Gras toped with honey and red wine jelly. We excitedly even got the opportunity to sample the sold out 2013 Riesling, successor to the winery’s Lt. Governor’s Award-winning 2012 vintage. 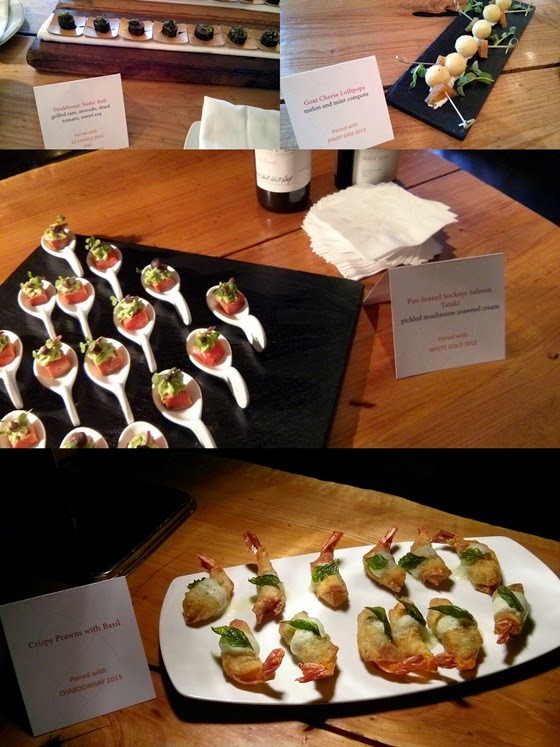 I’ve had plans to visit Lillooet some time in the future ever since meeting Rolf & Heleen during the early stages of their winery. This recent trip was a wonderful surprise and an incredibly valuable opportunity to see and learn even more about the cutting edge of viniculture in BC, not to mention viewing another part of our beautiful province. Congratulations to the committed ownership team at Fort Berens, and the clearly passionate staff throughout the winery, vineyard, and tasting room. I look forward to following this winery, and the community they are building, for many years to come!