The BC Wine Appreciation Society visited The Blackbird recently for a Harvest Party festival-style tasting of cellar favourites and tasty treats. Since last December’s Holiday Bash this downtown restaurant’s third floor private suite is becoming a favourite haunt of the BCWAS due to the comfortable room – with couches, pool table, and even a movie screening area – plus generous food and attentive service. Although sit-down winery and varietal tastings will always have an important place, it’s great to change venues and move around once in a while, taking more opportunities to socialize with fellow members. 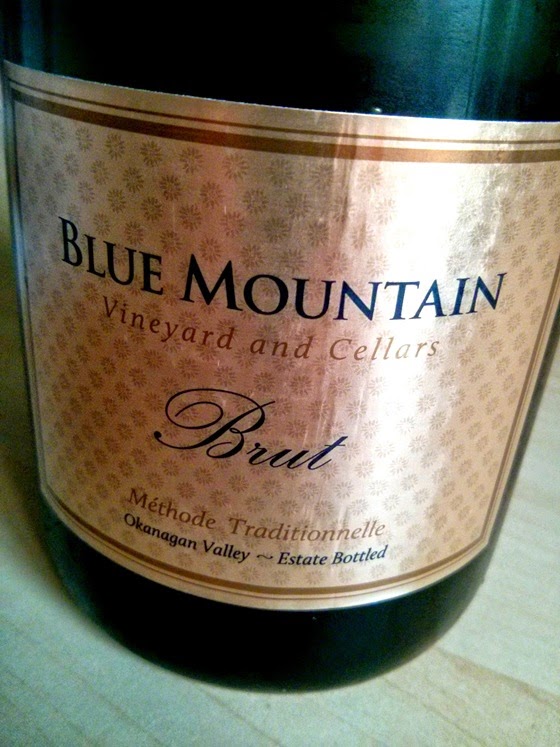 The BCWAS cellar has been thoughtfully assembled by hard-working Cellarmasters over the years, and it’s always a joy to enjoy aged examples of our region’s finest wines. Several mature red blends from the Society’s extensive vertical collections were pulled for the Harvest Party, joined by some younger wines amassed by the Executive during the recent Fall Bus Tour in the Okanagan. A menu of hors d’oeuvres and thin crust pizza from The Blackbird provided plenty of sustenance and flavourful pairings for these juicy gems.

Upon arriving upstairs guests were provided with a glass of Blue Mountain Brut, the esteemed local sparkler that makes every occasion more enjoyable. Crisp apples, apricots, honeycomb, fresh cut flowers, and a mouth-watering finish focused our palates and put a smile on faces. White wines from Bus Tour visits this year included Intrigue 2013 “Focus” Riesling and SpierHead 2013 Pinot Gris, plus some 2012 Viognier from new corporate member C.C. Jentsch. The Viognier surprised with a luscious profile and fairly viscous texture; ripe stone fruits and crème brûlée character provided plenty to chew on. The Mini Dungeness Crab Cakes on the menu were the food of choice for such a rich wine.

The Bus Tour visit to Intrigue Winery north of Kelowna found us exploring a pair of Rieslings from Winemaker Roger Wong. The “Focus” version is the more serious of the two – much drier and possessing more lean acidity – and the one brought home to share with members at our Harvest Party. On day two of the Bus Tour we made it to SpierHead, where the winery’s attractive Pinot Gris impressed many, enough that a few bottles came home for the Party as well. In the meantime this excellent wine went on to win one of the five inaugural Platinum Medals at the BC Wine Awards! Sipping a glass at the Party revealed a very pretty nose of fruit blossoms, followed by a superbly balanced palate of ripe pink peaches. 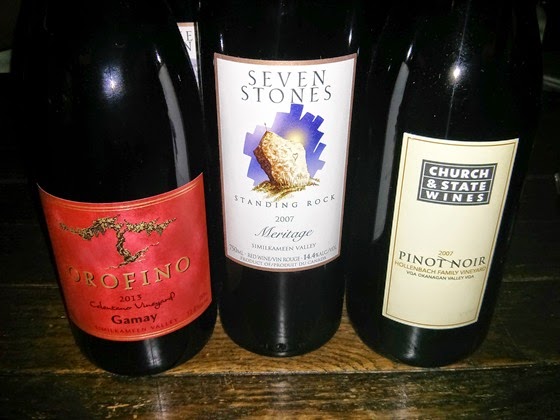 A bevy of reds soon beckoned, so wise guests dug into a few slices of the many pizzas from The Blackbird’s kitchen: there was more than enough Margherita, Salami & Ham, and Funghi (Mushroom) to go around. Before trying some of the big blends we dug out of the cellar, knowledgeable tasters headed straight to the Orofino Vineyards 2013 Gamay, great with pizza in fact! This delightfully fresh, slippery wine showed earthy hints, bright berries, vanilla, and baking spices, clearly explaining this summer’s National Wine Awards Platinum Medal. Only one hundred cases were produced, and anyone with a bottle or two remaining should count their lucky stars.

The food kept coming even as we could barely keep up with all the pizzas, but we had the perfect wine to go with Crustrade with Duck Confit, as well as Forest Mushrooms on Grilled Polenta. From long in the past of a celebrated winery, the 2007 Church & State Hollenbach Vineyard Pinot Noir originally won a Gold Medal at the 2009 Canadian Wine Awards (precursor to the aforementioned Nationals). That very same year the winery produced their final Pinot Noir, upon embarking on a stronger Estate-vineyard focus, which precluded Pinot Noir from their southern Okanagan terroir. Like many esteemed BC Pinot Noirs, the 2007 Church & State showed outstanding aging: highly aromatic, the very rich palate yielded sublimely silky notes of cloves and stewed berries, with a slightly sweet finish as a final memento.

The BCWAS cellar is admittedly awash in red Meritage blends; with so many tempting and exciting signature wines it can be hard to maintain an limited collection. These long-lived wines provide an exciting glimpse into the past, and an opportunity to explore BC wines’ living history. A few of the nearly decade-old (decade-young in some cases) bottles emerged to be shared at the Harvest Party. From long-time BCWAS favourite Fairview Cellars, 2005 “The Bear” immediately impressed with an admittedly youthful nose. Refreshing, juicy fruit and smooth, pure berry character showed Proprietor/Winemaker Bill Eggert’s prowess at crafting ageless red wines from his Oliver vineyard. 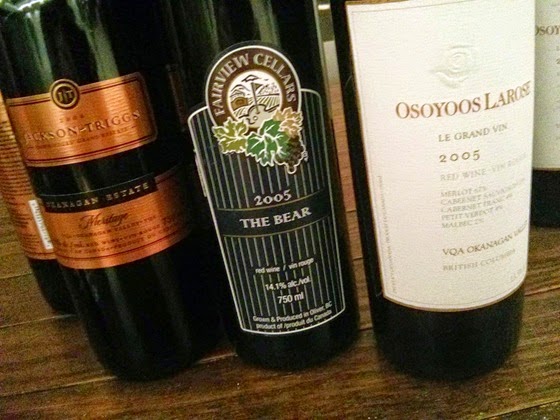 Another window into 2005 came to us from Osoyoos Larose: “Le Grand Vin” provided more hints that viable years in the cellar remain, given the still-noticeable tannins. The savoury, meaty nose called out for one of the Mini Yorkshire Puddings being circulated, stuffed with roasted rare prime rib and horseradish cream. A dark fruit under-current, given two thirds Merlot, kept matters warm and left a thought-provoking finish. Had one found oneself with a second Yorkshire Pudding, a glass of Jackson-Triggs 2006 Grand Reserve Meritage would also have served quite well. Even if the Puddings ran out, there were Warm Truffled Beef Shortrib Tartlets for further enjoyment with a blend of 50% Merlot, 45% Cabernet Sauvignon, and 5% Cabernet Franc. The savoury nose and umami hints in the Meritage made it generously food friendly, but a very smooth, cherry palate permitted easy solo satisfaction as well.

We reached the 2007 mark in the red blend section thanks to Similkameen stalwart Seven Stones, from which Proprietor George Hanson has only recently released the 2009 vintage of his Meritage in fact. One or more of The Blackbird’s addictive Mini Pulled Pork Sliders would have been an enjoyable companion to George’s 2007 blend of 60% Merlot, 35% Cabernet Sauvignon, and 5% Cabernet Franc. Aromas of leather and smoked sausage hinted at one direction but the fruitier, creamy-textured palate surprised with some molasses and a bit of menthol on the finish.

Before concluding the evening one of our guests had a special gift to share with the group. Naramata Bench Winemaker Robert Van Westen had joined us for the evening and had brought a couple previews of his yet-to-be-released 2012 reds. The graciously donated wines included a new addition to the Van Westen Vineyards wine portfolio: the “Violeta” is a varietal Malbec which is certain to become popular, and also proves that Robert has yet to run out of “V” nomenclature for his wines! A well-attended raffle saw both bottles end up in good hands, with two very happy members in possession of some exclusive cellar selections.