As a member of Meyer Family Vineyards’ Wine Club I receive a mixed case of wine each year, divided into three annual shipments to align with the winery’s release dates. My most recent shipment in the “Some of Everything” club category, the last for 2014, focused on Chardonnay. I’ve been waiting patiently for the 2012 vintages of Meyer’s exquisite single vineyard Chardonnays all year, reading reviews and hearing positive press, so it’s a relief to finally get my hands on them! In addition to both 2012 single vineyard wines, a new entry-level Chardonnay from the 2013 vintage was provided, plus a preview of yet to be released 2013 Pinot Noir. 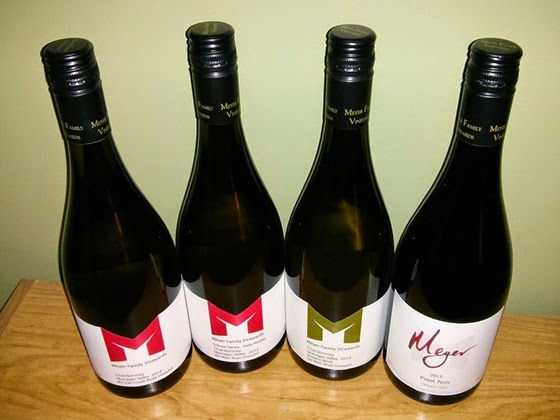 The winery’s two age-worthy flagship Chardonnay (in addition to the icon “Micro Cuvee”) include one from the home vineyard on McLean Creek Road in Okanagan Falls. The ideal conditions in 2012 resulted in clean, superbly balanced grapes by the time harvest began in early October. The wine was primarily fermented in stainless steel before transfer to 100% French oak (20% new) and ten months on the lees, with a reported natural malo-lactic fermentation. I recently greatly enjoyed a bottle of the 2010 McLean Creek Road Chardonnay from my own cellar, and expect the 2012 to follow suit with similarly elegant fruit, subtle buttery character, and near-perfect balance. The winery has been proudly trumpeting their 92-point score for this wine from Beppi Crosariol in the Globe & Mail. Local Vancouver Sun critic Anthony Gismondi saw fit to award 90 points and pointedly remark the wine is “venturing down the complexity road like few of its competitors.”

In addition to the vineyard surrounding the winery in Okanagan Falls, the Meyer family own a parcel on the Naramata Bench, from which the annual “Tribute Series” Chardonnay is produced. The fifteen-year-old Old Main Road Vineyard was harvested two weeks later than the more southerly Okanagan Falls terroir in 2012, but the grapes were processed almost identically, with the only difference being 33% new oak was used. The wine was dedicated to broadcaster Kelly Hrudey, for whom the annual tribute will take the form of $5,000 from Meyer to a charity of Mr. Hrudey’s choice. Glowing reviews for this Chardonnay have also taken shape over the course of 2014, with Gismondi complimenting the fresh, light wine’s finesse. WineAlign head judge David Lawrason remarked on the “riveting” character and fruit-forward, expansive palate in his 92-point review supporting the wine’s Silver Medal at the 2014 National Wine Awards he co-led with Gismondi.

A final Chardonnay in the shipment consisted of something new – a block-specific Chardonnay from the Old Main Road Vineyard. The 2013 “Steven’s Block” Chardonnay is said to come from the steepest and coolest rows in the Naramata site, with such distinctive terroir as to justify 113 cases of small lot wine. The $24 price tag comes in below the $30 asked for the two red label bottles (and is uniquely labelled with bronze colouring), suggesting a potential mid-point between the higher end wines and the $20 blended Okanagan Valley Chardonnay. Author John Schreiner tasted the new wine in late summer and enjoyed the generous palate and crisp finish. I look forward to delving into my own bottle relatively soon, and seeing where this new product line develops in the years to come. 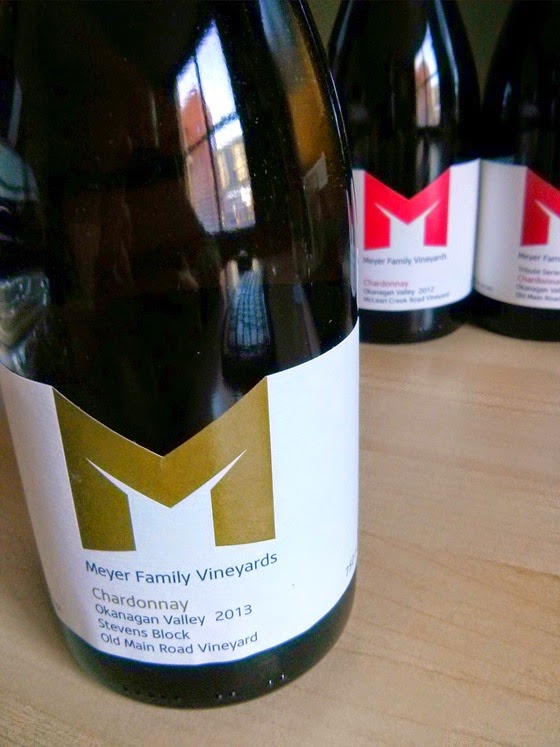 During a visit to Meyer as part of the BC Wine Appreciation Society’s 2012 Fall Bus Tour, tour guests were served the 2010 vintage of the winery’s entry-level Okanagan Valley Pinot Noir. I distinctly remember the broad appreciation for the value proposition of this $25 wine, blended from multiple vineyards and growers throughout the valley. The final wine in my Club shipment was a bottle of 2013 Okanagan Valley Pinot Noir, not yet formally released at the winery, as the remainder of 1,600 cases of 2012 are still for sale. I found enough reason to open the bottle and enjoy it early: the nose presents berry fruit and cloves (with little earthiness), while a fuller-bodied palate than expected yielded sweet stewed strawberries and smooth tannins. The wine is quite easy-drinking, but admittedly lacks the complexity and elegance of Meyer’s single-vineyard Pinot Noirs in the $40 price range. This isn’t necessarily a problem, if anything it suggests the wines are legitimately differentiated and appropriately priced. The 2013 Reimer and McLean Creek Vineyard Pinot Noirs will contribute more insight into the 2013 vintage upon release next year – I’m looking forward to my next shipment!