After a very busy summer the four couples in our wine club finally got the chance to gather in one place for dinner recently. It was a chance to catch up and share some culinary creations over a few bottles of BC wine. The autumn weather must have inspired all of us in a similar fashion, as light red wines and warm comfort foods provided pleasantly pervasive. Some old favourites and a few new releases offered us plenty to discuss alongside delicious food pairings from our respective kitchens. 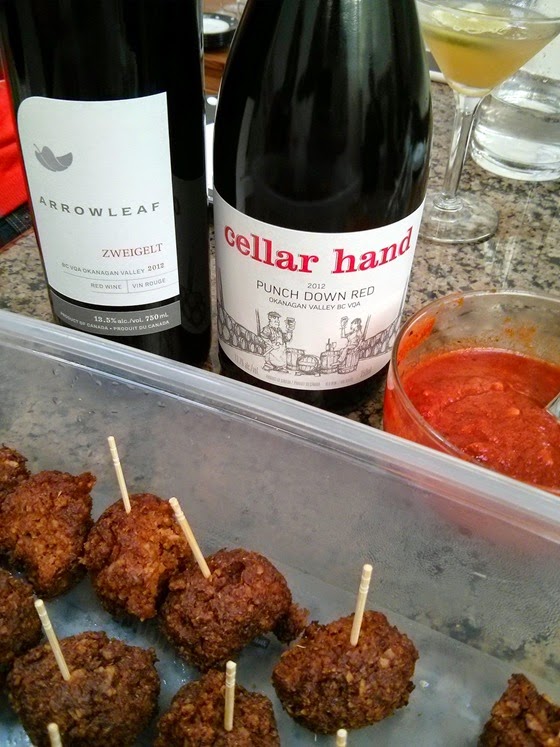 Some irresistible cheeses and cocktails couldn’t be turned down, while hors d’oeuvres were finalized and accessorized. What we soon discovered with glee were Walnut-Mushroom “Neat Balls” and a trio of mouth-watering dipping sauces in savoury flavours of barbecue, mustard, and marinara. These tasty little nuggets partnered with a couple of youthful red wines to get us started. The Arrowleaf 2012 Zweigelt displayed a striking amethyst colour in the glass that immediately caught my eye. The gorgeously smooth, soft fruit texture offered generous elements of leather and clove, pairing particularly well with the marinara sauce.

We next cracked open a bottle of Cellar Hand’s budget-friendly 2012 Punch Down Red for some comparative analysis. The Red, plus “Free Run White”, come from Black Hills’ second label line-up, reportedly crafted by the winery’s cellar hands themselves from a few barrels and full experimental latitude. The Punch Down Red provided some immediate contrast to the Zweigelt – jammier on the nose and palate, with a fuller body and sweeter flavours. It was quite easy-drinking and enjoyable overall, coming from the generous 2012 vintage that yielded bountiful and ripe fruit in the southern Okanagan, where Black Hills farms the Merlot, Cabernets, and Syrah found in the blend. 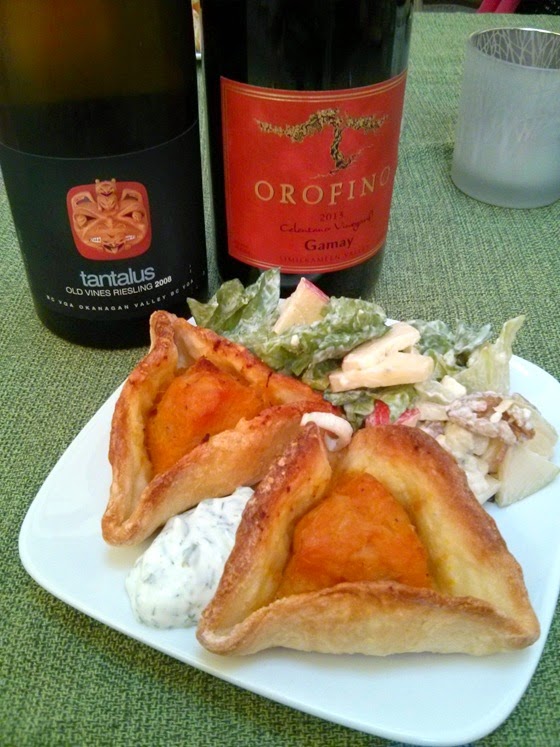 Having dealt with the initial hunger pangs, we settled down and prepared for the appetizer course, taken in hand by myself and my wife for this meal. Our inspiration came from the quintessential fall fruit – pumpkin! Reviewing old issues of the BC Liquor Stores TASTE Magazine I came across Baked Pumpkin and Onion Dumplings with Herb Dip, which we then accessorized with a creamy Apple and Blue Cheese Salad. Contrary to the recipe photo, our Dumplings wouldn’t stay closed, but at least the flavours stuck around to pair with Tantalus 2008 Old Vines Riesling and Orofino 2013 Gamay. Although I had the feeling either wine would pair nicely with the dish, I couldn’t resist sharing both bottles, and suspected few complaints would be voiced.

The Old Vines Riesling was released back in 2011 – fairly delayed for a 2008 white, but Tantalus likes to ensure sufficient bottle aging for this legendary wine. Even with another three years in bottle it still presented youthful vibrancy: generous citrus aromas carried through to the focused and racy palate, where petrol character emerged. Even on its own, let alone dancing with the sweet and savoury pumpkin and rich blue cheese, the wine was enough to elicit accolades around the table. Fortunately the Platinum Medal Gamay proved no slouch, providing an additional round of intensity to entertain our palates: bright, fresh cranberry and cherry fruit flavours plus a sprinkling of cinnamon spice made for another adept pumpkin partner. Orofino suggests chilled summer enjoyment – which I can vouch for with enthusiasm – but the wine’s pure enjoyment factor provides the versatility for all-year enjoyment. 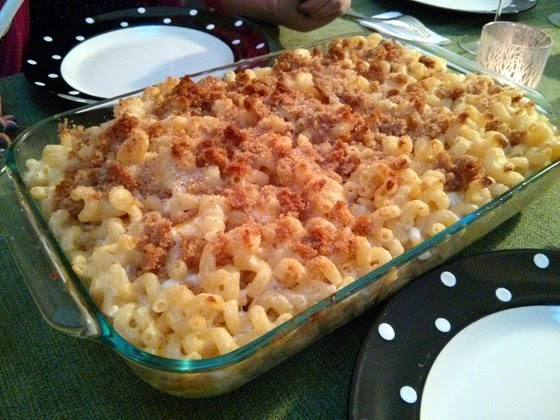 As we sipped a little bit more from the four bottles already available our entree course emerged from the oven in all it’s crispy, gooey glory. Three-cheese macaroni presented by our hosts was said to contain Romano, Cheddar, Cottage cheese, and some sour cream for good measure. To calm our beating hearts some roasted Brussels Sprouts and a crisp green salad provided balance and a few vitamins on the side. Apparently the two-bottle concept was broadly in mind, as we received with glee Painted Rock 2013 Chardonnay and Moon Curser 2011 Syrah, two of my personal favourites. 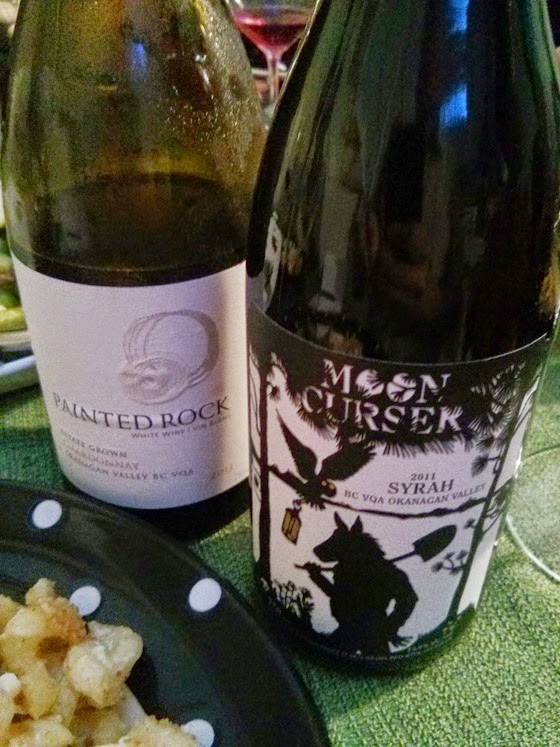 John Skinner and his team at Painted Rock have been fine-tuning the Chardonnay for a few years via painstaking work in the vineyard and at harvest. Multiple passes to pick clusters at ideal ripeness and acidity are labour intensive, but the results show in the fruit forward expression that easily absorbed the 5-month French oak treatment. We relished the nicely integrated, complex palate, showing fresh citrus and stone fruit with food-friendly toasty accents. The creamy and crispy macaroni made just as nice with the Gold-medal Syrah as well, from which Winemaker Chris Tolley has coaxed generous floral cherry aromas, supported by pepper and a hint of bacon. Cherries and plum on the smooth palate led into milk chocolate raspberries at the finish, giving us plenty to observe and admire. 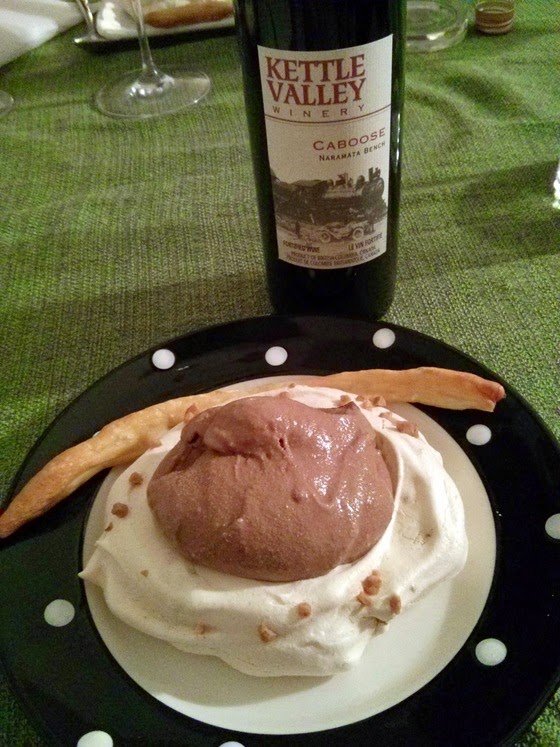 Chock-full of pasta we had to find room for the always anticipated dessert, an assembly of homemade meringue, ice cream, and a crunchy pretzel stick. The Skor Meringue was topped with Scotch Ice Cream, and paired to Kettle Valley’s Caboose fortified red wine, a blend of ripe Malbec and Petit Verdot from the Naramata Bench. I’m always excited to try this rich prize, produced via the Solera method, yielding a blend of many vintages that promises to  increase in complexity each year. We readily absorbed the alcoholic tingle on the wine’s yeasty nose, with a jammy character soon wafting about. Interacting with the intense ice cream produced a Kirsch character that finished with bright blueberries and plenty of satisfied smiles. 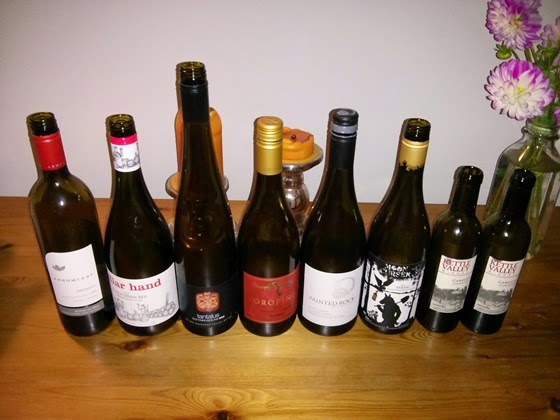 As the Caboose is presented in half-size bottles the dessert team had wisely brought two, consumed with rapidity as we wound down and remarked on the delicious meal. The creative contributions of everyone involved left us feeling very lucky once again to enjoy such great food, wine, and company!