While fruitfully working through a bit of a cellar backlog this fall (making room for new vintages) I still found the time to purchase a few bottles I couldn’t resist. Several new and recently released wines caught my attention, either on store shelves or in the news. I lucked out on a few, and others took a fair amount of hunting to track down across Vancouver. 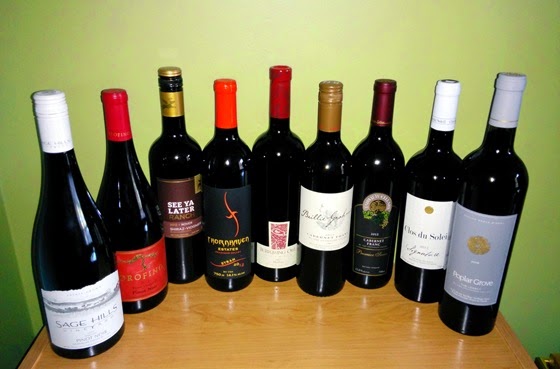 Sage Hills 2013 Pinot Noir: I scooped up one of the last bottles on the shelf of this new release; only 191 cases were produced from Rick Thrussell’s organic Summerland vineyard. John Schreiner recently reported the wine was almost certainly released prematurely (with many years of development ahead), but Rick bowed to pressure “after his debut 2012 Pinot Noir was something of a sensation.” Swirl VQA Store – $45

Orofino 2012 Home Vineyard Pinot Noir: Keeping Sage Hills company is Orofino’s 2012 Home Vineyard Pinot Noir, a bright wine bursting with strawberry aromas and flavours. John & Virginia Weber grow five different Pinot Noir clones in their Cawston vineyard, and aged this blend of all five for 16 months in French oak. I may end up receiving a bottle in my next Orofino Collector’s Club shipment but that shouldn’t be much of a problem at all! Swirl VQA Store – $32

See Ya Later Ranch 2012 Rover: The latest release from a popular and widely available entry level Syrah. Anthony Gismondi has provided some impressive praise for past vintages, such as the 2008, noting it’s a wine that seems to get better and better every year. When the 2012 was recently awarded the new “Premier’s Award” for best wine of the entire BC Wine Awards, it seemed only reasonable to cellar a bottle for the future. At present it’s a bit disjointed, with alternating earthy and fruity notes that haven’t yet melded, but I’m looking forward to seeing what a couple of years aging can yield. Swirl VQA Store – $22

Thornhaven 2012 Syrah: After the National Wine Awards results were announced in late summer I paid close attention to the handful of Platinum medal-winners. Several BC wines made the list, including three 2012 Syrah, only one of which I hadn’t yet acquired. The bottle from Thornhaven in Summerland was more elusive, with the 2011 vintage still on VQA Store shelves. I have to admit, a Summerland appellation Syrah is a curious wine indeed, and this one has reportedly seen a brief 10 months in oak – it should prove quite interesting. Coal Harbour Liquor Store – $33

Burrowing Owl 2012 Malbec: Burrowing Owl only just introduced Malbec to their portfolio last year, with the inaugural 2011 release joining a mere handful of BC wineries producing a varietal version. The new release was bottled in August, fresh from 21 months in a mix of 80% French, and 10% each American and Hungarian oak. The dense fruit style of Burrowing Owl, combined with the excellent vintage and hand-harvesting from the winery’s Osoyoos vineyard should equate to an excellent collectible. Liberty Wines Granville Island – $37

Baillie-Grohman 2012 Cabernet Franc: The new Platinum category introduced at this fall’s BC Wine Awards is intended to award those wines judged unanimously worthy of Gold medals by all nine judges. Only five Platinum medals were handed out in September, including one to young Creston winery Baillie-Grohman. Although the winery has established estate vineyards, they still source reds from the Okanagan and Similkameen valleys: ten barrels of Cabernet Franc were obtained from an exclusive single vineyard in Osoyoos. Swirl VQA Store – $27

Fairview Cellars 2012 Cabernet Franc: On my way to the BC Wine Appreciation Society Bus Tour in September I stopped in to Bill Eggert’s winery outside Oliver. I received the sad news that his 2012 Cabernet Franc was long since sold out. I had heard some impressive praise for the wine, no surprise given the vintage and Bill’s talent with Cabernets. I was pleasantly surprised to spot the wine afterwards on store shelves. Perusing the back label I’m pleased to see Bill has continued his practice of noting the “Best After” date; in this case it’s December 2016, which fits perfectly with my five-years-from-harvest cellaring strategy. Marquis Wine Cellars – $35

Clos du Soleil 2012 Signature: From Keremeos, Clos du Soleil’s top tier red blend was actually doubled in production for this vintage, up to 475 cases, in anticipation of implementing bottle aging from 2013 onward. While bottles may seem prevalent now, shortly after release, once it’s gone there will be a long wait for the next vintage, so stock up while you have a chance! Should I follow through with my rotating vertical strategy, I can now open the 2008. However, the Signature has proved very long-lived, so further delay will likely provide even greater enjoyment. Swirl VQA Store – $40