My semi-annual mystery case from Orofino Vineyards’ Collector’s Club arrived recently, bursting with tasty treats and new releases from the Similkameen Valley. Unlike many wine clubs the contents of this one are not broadcast to members in advance, making it a true unknown what one is to receive, but I trust owners John & Virginia Weber enough not to worry, knowing they save the most exclusive wines for Club members. Should a particular wine be missed in a given year, there is also a guarantee that members will always have access to purchase at the winery. The latest case focused primarily on four wines, plus the usual Club-only bonus. 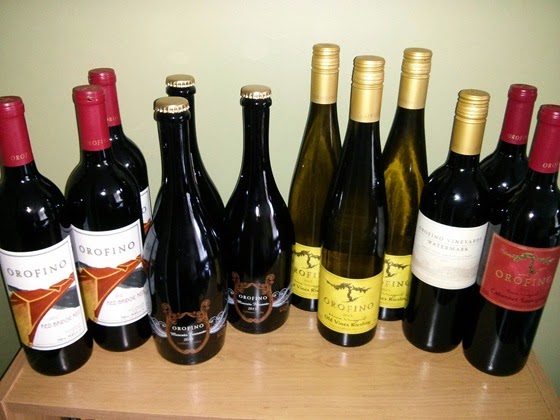 Orofino’s increasingly popular Moscato Frizzante was absent from the earlier summer shipment, due to a later than usual release this year. The delay was made up for through the inclusion of three bottles in this recent case. The 2013 Frizzante is now the third year for this charming sparkler, presented in an elegantly-shaped, silk-screened bottle with convenient crown cap. Old-vines estate Muscat is blended with the neighbours’ (Hendsbee Vineyard) Muscat Bianco, and typically a touch of Riesling and Pinot Gris for acidity and “BC flare” respectively. The carbonation provides a light effervescence that makes the wine a great aperitif, with tropical fruit aromas and slightly off-dry palate that finishes bright and crisp. The latest three bottles have ensured I can continue keeping one in the fridge at all times!

The triplet theme continued into a set of 2013 Home Vineyard Riesling, one of the three vineyard-specific Riesling Orofino now produce (the other two, from Hendsbee Vineyard and Scout Vineyard, arrived in the summer shipment). On the Weber’s estate vineyard in Cawston there sits less than one acre of 25-year-old Riesling, which John uses to produce just 100 cases of this intense, relatively dry wine: at 8.8 grams of sugar, the Home Vineyard wine falls between the very dry 4.4g/L Hendsbee and the 12.5g/L Scout. However, native yeast barrel fermentation and lees stirring help the complex Home Vineyard Riesling stand out amongst its peers. Having three bottles provided the opportunity to open one in the present, before setting aside the remaining pair for more aging. The nose presents immediate lemon curd aromas with just a hint of the traditional petrol notes (less than expected in fact). On the palate it is reminiscent of fresh-baked lemon squares, made with freshly squeezed lemons of course. Altogether quite pretty, and very refreshing, providing substantial curiosity as to how it will mature over time.

The Webers must have been thirsty as they prepared this case, for another group of three bottles was also included, in the form of 2012 Red Bridge Merlot. The Merlot has been a stalwart in the Orofino portfolio since nearly the beginning, and represents the winery’s only non-Similkameen input. The Oak Knoll Vineyard in nearby Kaleden consists solely of five acres of Merlot, devoted exclusively to this finely tuned wine. I remember tasting the 2011 vintage last fall at the winery and being very excited about the freshness exhibited. Opening a bottle of the 2012 revealed a rather intense, ripe and rich wine, to be expected from the warmer conditions in 2012, especially after a generous 20 months in oak. Youthful tannins are present but not discomforting, and the long, juicy finish provides flavours of blackberry, plum, and black currant, with a surprisingly manageable 14.6% alcohol.

A pair of bottles from a brand new Orofino wine followed the Merlot: the 2011 Scout Vineyard Cabernet Sauvignon is the first release from one of Orofino’s favoured vineyard partners. While a Passion Pit Vineyard Cabernet has existed for a couple of years (since 2009 vintage), the Scout Cabernet now adds to the winery’s big red division. The Scout Vineyard, overlooking the Similkameen River, grows slightly more than four acres of Syrah, Riesling, and Pinot Gris at present. Given the yield of this new wine (only 100 cases) I would expect less than one acre of Cabernet Sauvignon exists as well. Having two bottles gives me a chance to try the wine at some point (say 2016/2017) before determining how long to cellar the final bottle, which the winery suggests could be for as long as several years from now. 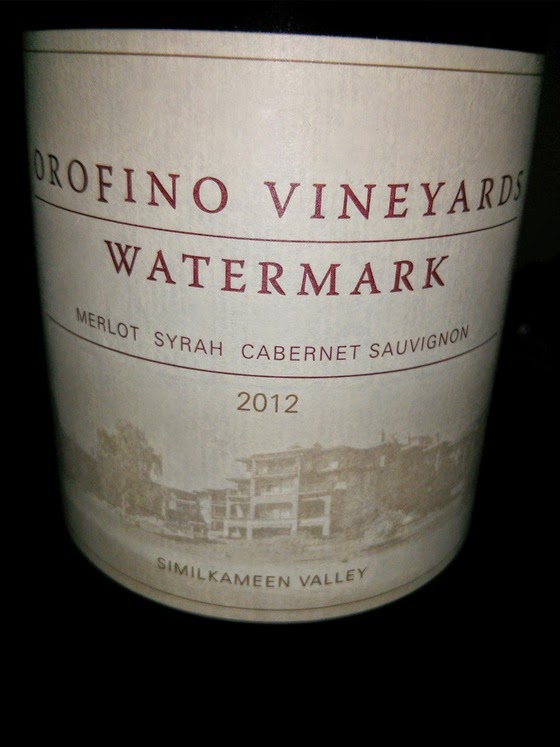 The final bottle in the box was particularly unexpected, providing a pleasant surprise in the form of one of Orofino’s custom-label wines. The winery recently partnered with Osoyoos’ Watermark Resort to produce a pair of house wines; the 2012 Watermark Red I received comes from the second year of this project. I cracked open the bottle to seek further insight into this blend of Merlot, Syrah, and Cabernet Sauvignon: on entry the mouth-filling texture offers sweet fruit, with bright blueberry and cherry character emerging. Coming from such a recent vintage I was surprised at the low levels of tannin, but I’m guessing the intent was to produce an easy-drinking wine ready for more immediate enjoyment. This wine would succeed quaffed alongside summer barbecue or winter comfort foods – after all the Resort remains open all year round! After similarly teaming up with acclaimed Hawksworth Restaurant in 2012, the Orofino team can celebrate another creative and fruitful partnership.