The annual wine country pilgrimage to join the BC Wine Appreciation Society fall bus tour provides one of my best opportunities for wine shopping at the source. Although I like to visit the Similkameen and Okanagan Valleys during the summer, it’s only once autumn begins do the red wines I particularly covet begin to appear anew. As the Bus Tour was scheduled to take place in the northern Okanagan surrounding Kelowna this year I knew most of my shopping would be done on the way there. My journey would take me via Osoyoos and Oliver, where red varieties like Syrah, Merlot, and Cabernet thrive. In the Similkameen Valley I made sure to stop at Orofino Vineyards to offer my greetings, whilst patiently awaiting my semi-annual “Collector’s Club” shipment later this fall. I very gratefully picked up some of the winery’s Platinum Award-winning Gamay to be served at an upcoming BCWAS event. Down the road at Seven Stones I was lucky enough to find owner George Hanson behind the tasting room bar, and we spent some time catching up before I departed with what should be some superb wines from the 2012 vintage: George’s small lot Cabernet Sauvignon (235 cases produced) and Syrah (only 125 cases) often sell out in short order. I took advantage of the wide selection of beautiful jewellery for sale to pick up a little something for my wife, while George passed along some tongue-in-cheek marital advice to go along with the silver necklace. 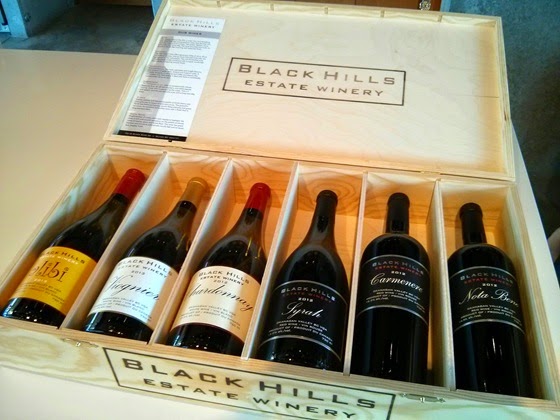 Passing through Osoyoos I had the entire length of the Okanagan Valley ahead of me, with wineries left and right as I inched north towards Kelowna. At Burrowing Owl I snatched up a bottle of brand new 2012 Syrah, just bottled last month! At least a couple more new releases are upcoming later this fall, so I’ll have to hope I can order them from the winery (which fortunately ships in quantities as low as two bottles). Nearby, a visit to Black Hills was long planned so as to finally obtain a wooden box for my patiently-collected vertical of the winery’s Nota Bene red blend. The only way to get one of these beautiful boxes is to buy the pricey six-bottle portfolio collection. While the included whites will surely find a happy home with me in the short run, I relish the opportunity to cellar recently released 2012 Syrah and the exclusive 2012 Carménère. It’s no surprise the ultra-rare Carménère isn’t entered into competition, but the Syrah was awarded a Silver medal at this year’s National Wine Awards: judge and critic Anthony Gismondi recently suggested another two years in bottle would be ideal while penning his 88-point review. 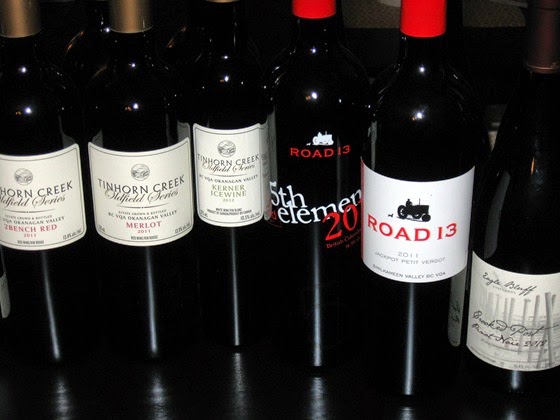 Having finished my business on the Black Sage Bench I traversed the valley floor west to the Golden Mile, where a handful of stops proved quite productive. At Road 13 Vineyards I picked up the newest vintage of the icon red “Fifth Element”, having missed the formal release by mere days at the time of my summer visit. With the 2011 in hand I now have a five year vertical reaching back to 2006 (the 2008 was never produced). I also couldn’t resist a bottle of the 2011 Jackpot Petit Verdot, of which only 67 cases were produced from some stellar Similkameen Valley fruit. I’ve been awaiting this wine, as I was lucky enough to try a stunning barrel sample 18 months ago during the 2013 Vancouver International Wine Festival. I took the opportunity to bring home a few bottles of newly released 2011 Sparkling Chenin Blanc as well, a long-time house favourite of friends and family, and recent Gold medal-winner at the National Wine Awards.

Up the road at Tinhorn Creek I swung through the tasting room and picked up my latest Crush Club order, consisting of a series of reserve Oldfield Series wines. The autumn release of reliable 2011 Oldfield Merlot and 2011 Oldfield 2Bench Red had originally provided for three bottles of each in my Club six-pack. However, seeking a bit more variety I had requested some allowed substitutions, consisting of one bottle of 2010 Oldfield Series Pinot Noir, and another of the 2012 Kerner Icewine. Early reviews of the 2011 reds have been positive, from the elegant Merlot, to the floral, fresh, and ripe 2Bench Red. With the clock ticking I quickly jumped next door to Fairview Cellars, where I squeaked in before the 5pm closing and came out with a bottle of 2012 “Crooked Post” Pinot Noir. While Proprietor Bill Eggert’s bigger 2012 reds remain aging in bottle until a spring 2015 release, the Pinot Noir comes from the first year of full production in his new Eagle Bluff vineyard. It’s a lighter wine than many as Bill doesn’t bleed off any juice for Rosé, but it deftly displays the consistent quality and purity for which he is known. 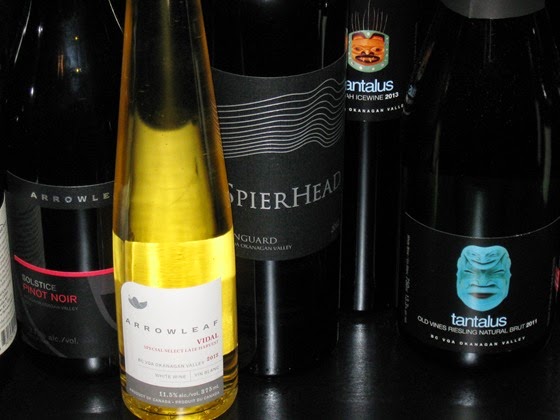 Over the course of the two day bus tour I managed to find a few more gems, but I kept my purchasing in check, having added plenty to my cellar just on the way there! On the first day I took a chance on Arrowleaf’s 2012 Solstice Pinot Noir, after being quite impressed by the other very good value whites and reds we tasted there. Amongst those wines was the delicious 2013 Special Select Late Harvest Vidal, Gold medal-winner at the 2014 All Canadian Wine Championships. A couple bottles of Vidal joined the Pinot Noir, with the thought that at least one might serve well for future gifting opportunities. Day two brought us to SpierHead in the morning, where the winery’s impressive Pinot Noir was still awaiting bottling, but I was pleased to acquire a 2012 “Vanguard”. The 2012 may be the final vintage of this red blend as SpierHead focuses on Pinot Noir going forward. After lunch at Tantalus Vineyards I picked up a pre-ordered collection of 2011 Old Vines Riesling Natural Brut – purchased in advance this spring while still available for sale. A bottle of 2013 Syrah Icewine couldn’t be resisted as I recalled fondly the 2010 vintage I shared with friends nearly three years ago. 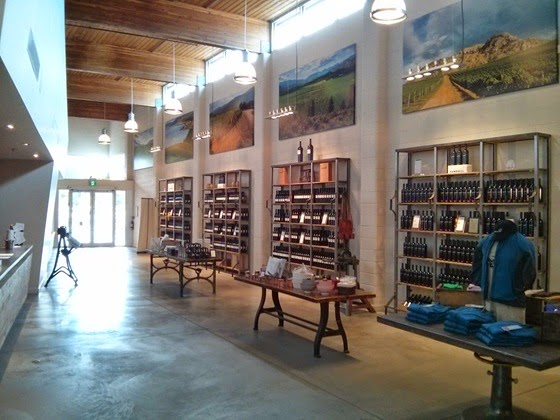 A relaxing trip home the following day saw me swing by only a couple more wineries to boost my haul, starting with an exciting visit to the brand new Sandhill Tasting Room in downtown Kelowna. The expansive new space is a huge upgrade from the previous room, boasting generous natural light, colourful displays, and extensive lounge space for event hosting. Admittedly on a Monday morning it was rather underutilized, but I can imagine plenty of room-filling functions are anticipated in the months and years to come. I carefully perused well-stocked shelves, to ensure I didn’t miss out on the rare Small Lots collection bottles, many of which are exclusive to the tasting room: into the remaining trunk space went 2011 Malbec (350 cases produced), Merlot (150 cases), and Petit Verdot (275 cases), plus 2012 Chardonnay (125 cases). 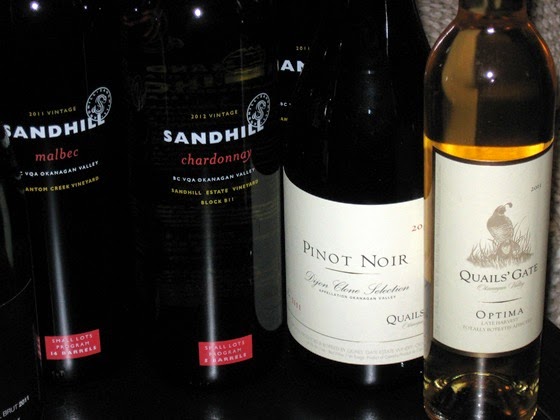 Finally, in West Kelowna I made a short visit to Quails’ Gate in search of any winery-exclusive surprises, something I’ve come to expect from the Stewart family winery. My hunch was vindicated when I came across 2011 “Dijon Clone Selection” Pinot Noir, a wine last produced from the 2008 vintage, and well received at that time as well. Considering the 2011 isn’t even mentioned on the winery’s web site I can only assume a meagre amount was produced: at least 2,111 bottles though, considering I took home that particular numbered bottle. Unfortunately I seem to have just missed the release of several special 25th Anniversary wines, including the winery’s first Syrah! At least a bottle of rich, luscious 2013 Botrytis-affected Optima will help to soothe that frustration, putting a particularly sweet finish on my 2014 cellar compilation.