A change of pace for the BC Wine Appreciation Society took place this month upon the occasion of a winery dinner celebrating Church & State Wines. The annual spring winemaker’s dinner has been a tradition for many years, and typically serves as the only dinner outside of the fall Bus Tour. However, with the assistance of additional member volunteers the Society was enthused to host nearly four dozen guests at the renowned Kitsilano Daily Kitchen for six creative courses of culinary delight. Church & State Marketing Manager John Pullen and Vancouver Sales Representative Jason Fung joined the dinner to take in the perfect pairings assembled by Chef Brian Fowke and his talented team. 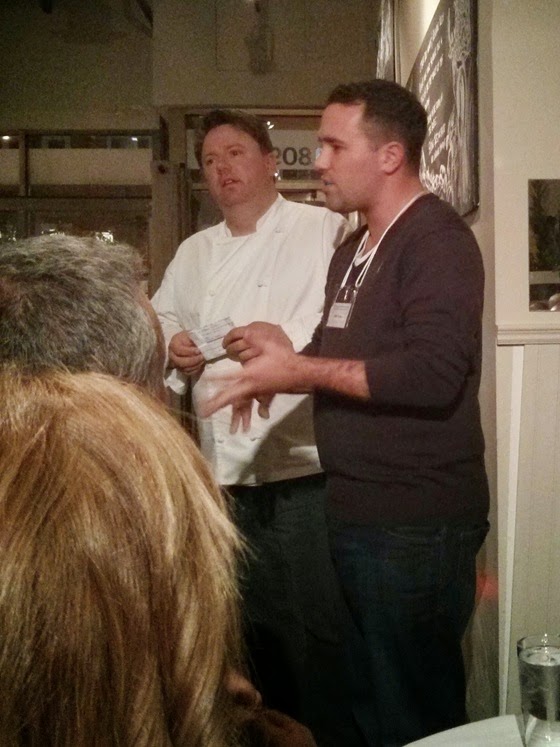 As tablemates introduced one another and friends reconnected we received a glass of Cuvée Blanc 2013, Church & State’s aromatic white blend. This combination of Gewürztraminer, Riesling, and a bit of Chardonnay Musqué provided a fresh and fruity welcome as Chef Fowke described his culinary philosophy. Based on his regular market and farm visits the restaurant presents a new menu every day, ensuring they use only the freshest, most seasonal produce, meats, and fish from sustainable local producers. Local Albacore tuna was the inspired pairing for the bright Cuvée Blanc, served Poke-style with tamari, sesame, Bird’s Eye chillies, citrus, and fermented fish sauce. The dish exuded freshness in perfect parallel with the citrus flavours and long, peachy finish on the wine, providing a marvellous primer on Chef Fowke’s gift for complementary creations. 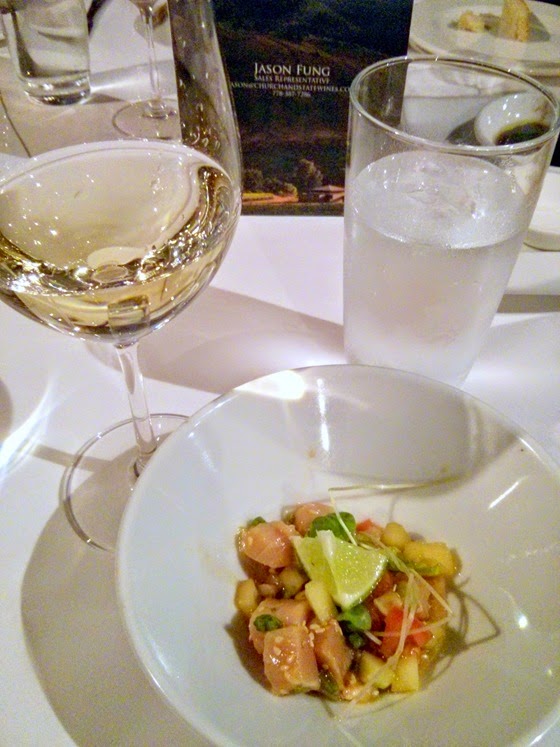 With our palates superbly roused by both wine and food we soon detected the intoxicating aromas of our next course. As easily identifiable glasses of Chardonnay were served the unmistakable aroma of truffle emerged from the kitchen. In varietally-corrected Riedel stemware we received Coyote Bowl Chardonnay 2012, one of two vineyard-specific oaked Chardonnay from Church & State’s Black Sage Bench location (the other being from the nearby Gravelbourg vineyard). Soon there appeared wide bowls of mouth-watering soup – Roasted Cream of Winter Cauliflower – accentuated with butter-poached Bell Harbour lobster, wild Rainbow Trout caviar, and shaved truffle! The Chardonnay provided for yet another superb pairing, in what was to become a happy pattern, with a toasty nose awash in caramel apple aromas. The creamy soup encouraged a citrus character from the wine, in which a full texture and very well balanced acidity brought great acclaim from the Chardonnay connoisseurs in our midst. It’s debatable whether a drop of soup, morsel of lobster, or bead of caviar remained! 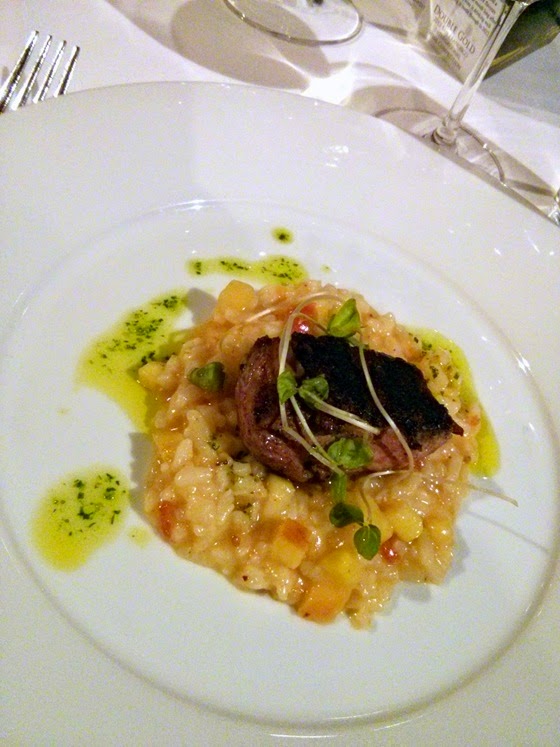 For our third course we received direct evidence of Chef Fowke’s local focus, as the expected Quadra Island shellfish stew was foregone due to recent stormy conditions hampering fishery operations. His preferred provider was unable to obtain sufficient qualities and quantities, necessitating an immediate and intense consideration of alternate options given the selected wine pairing. Church & State’s Trebella White was on the menu, a 2013 Rhone-inspired blend of Marsanne and Roussanne, with a touch of Viognier. This highly distinctive wine was ultimately paired with Chef Fowke’s choice of Rare-seared Yarrow Meadows Duck Risotto, including Northern Spy apple, roasted garlic, and caramelized lemon. The Trebella’s rich and elegant aromas of citrus flowers with stone and tropical fruit had no trouble keeping up, and the intense flavours and supremely well-rounded, integrated palate demonstrated why the wine was recently named Best White Blend at the WineAlign World Wine Awards of Canada. 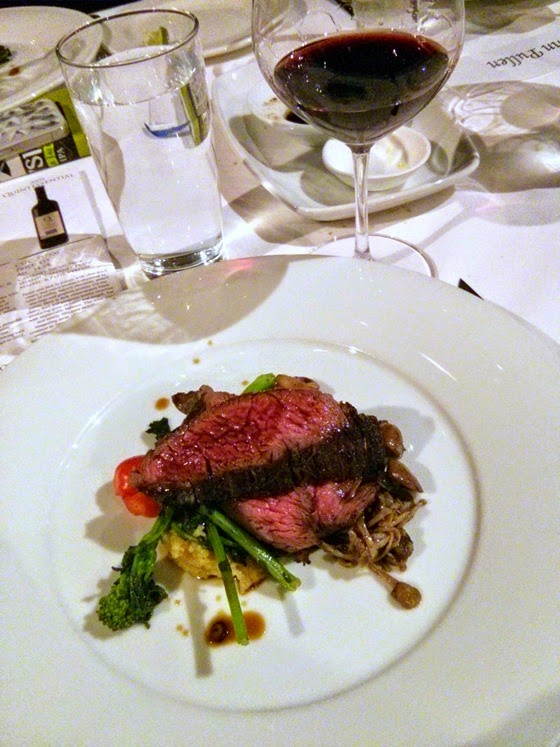 Three courses in it was hard to believe we had only reached the halfway mark, having enjoyed so much already! But Church & State’s legendary southern Okanagan reds had yet to make an appearance, so we braced ourselves for more pleasures of the palate. Jumping right into the midst we received the 2009 Quintessential, the winery’s icon red blend, developing nicely after some time in bottle (with many more promising years ahead). The complex blend of 40% Cabernet Sauvignon, 30% Cabernet Franc, 20% Merlot, 5% Petit Verdot and 5% Malbec was matched to Pan-roasted Peace Country Bavette of Elk, served atop creamy corn polenta, bordelaise sauce, and sautéed woodland mushrooms.

In last year’s SIP Wines annual “Icon Red Tasting”, the 2009 Quintessential was named runner-up, while just recently the 2011 vintage came out on top in the blind tasting’s seventh iteration. This comes on the heels of it being awarded the Canadian Red Trophy (and Gold Medal) from the International Wine Challenge in the UK. The first vintage of Quintessential was created in 2005, but the wine has been racking up an impressive array of accolades in a few short years. Our opportunity to sample this gem was a cherished one, providing aromas of toasty dark cherry and mocha before the intense dark fruit flavours and a smooth texture complemented by the rare Elk. Without food the tannins became more evident, showing the relative youth of this wine (the current vintage in stores) – the winery in fact believes several more years of bottle development can be expected. 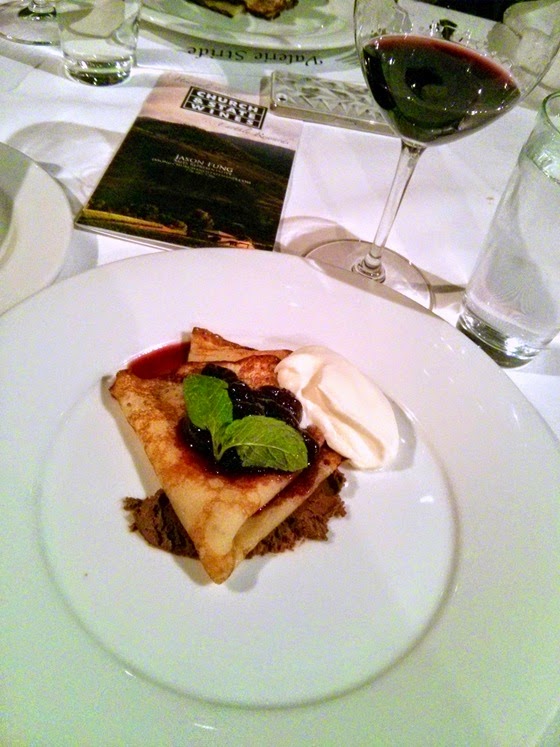 In 2011 Church & State was proud to celebrate their 2009 Coyote Bowl Syrah having been named Canada’s Best Red Wine at the Canadian Wine Awards. As its predecessor was being feted across the country, the 2011 vintage was just being harvested from the same outstanding vineyard. That wine, released earlier this year, has now gone on to win a Gold medal at the Decanter World Wine Awards, as well as being named Best in Class at the 2014 Pacific Rim International Wine Competition. As Church & State doesn’t typically produce any dedicated dessert-style wines the 2011 Syrah was tapped to provide for our final sips, with Extra Dark Chocolate & Preserved Okanagan Cherry Crêpes. Accessorized by Chantilly cream, Bourbon vanilla, and Maple sugar, the crêpes and chocolate ganache were enchanting on their own, but rose to another level with the Syrah. The wine’s intense black pepper aromas opened up to an all-encompassing cherry extravaganza alongside the preserved cherries, and demonstrating the complete success of a dry table wine for dessert! 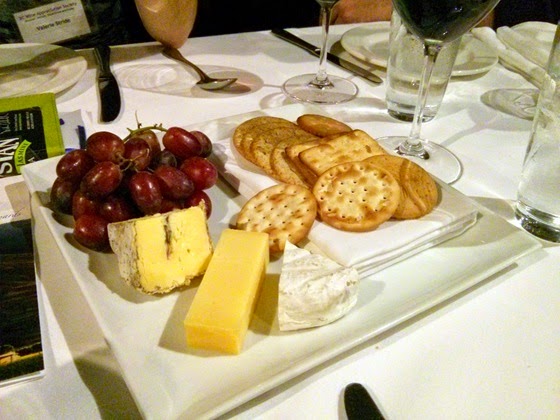 With rich aromas and flavours of cherry and chocolate still circulating we received generous plates of local artisan cheeses to enjoy as the meal concluded. Any remaining wine available was soon disbursed as guests traded opinions on their favourite dish – a challenge for many no doubt! There were well-deserved acknowledgments and applause for Chef Fowke’s talented staff, and to those who helped organize the event for the benefit of our members. Special thanks to Church & State’s John Pullen and Jason Fung, and to the hardworking BCWAS Executive members for bringing this spectacular dinner to fruition!