After what Tinhorn Creek President Sandra Oldfield cheekily described as years of effort she finally obtained the opportunity to host the BC Wine Appreciation Society’s annual dinner this year. She has seen her peers from Painted Rock, Van Westen, Quails’ Gate and others dining in style at Vancouver’s finest restaurants with the Society’s many enthusiastic members. The good times have been sufficiently enticing for Sandra to request the inclusion of her winery as well! The BCWAS has a long history with Sandra and Tinhorn Creek – four years ago the Society hosted Sandra in Vancouver for an amazing twelve-year vertical of her famous Cabernet Franc, going all the way back to the first vintage in 1996! We were all quite pleased to welcome her back to a relaxing dinner by the water on a beautiful spring day. 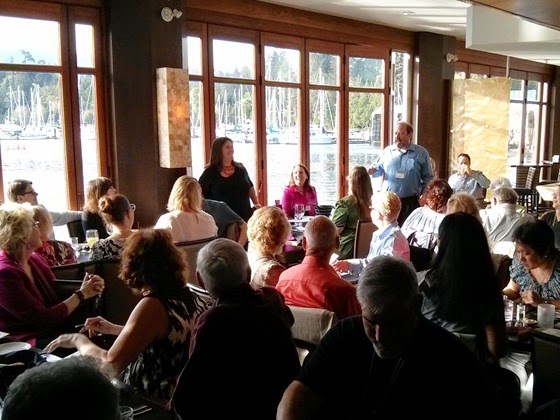 Four dozen members of the Society gathered for dinner at LIFT Bar & Grill in Coal Harbour, with spectacular sunlit views of Stanley Park and the North Shore. As sailboats tied up in the marina outside President Brian welcomed us with enthusiasm. This dinner was a milestone for Sandra in particular as it marked one of her first major public events since stepping down from the role of Winemaker. With good humour she recalled the consternation of many a customer and colleague who wondered what on earth she was going to do now – now that she is “only” President and CEO of the winery. As internationally-experienced Canadian winemaker Andrew Windsor is taking over to bring Tinhorn’s wines to an even better place, Sandra is freed up to focus on strategic goals of the winery and the BC wine industry in general. In her words, “If you thought we were doing great things before, when I was doing nine jobs, wait until I’m only doing seven!”

Our five course menu was developed by LIFT Executive Chef George Koay and Sommelier Sandy Hamilton, then laboriously tested by President Brian and Events Coordinator Kristal a few days earlier. A market-fresh vegetarian menu was also available for enjoyment, of which several guests took advantage, myself and my wife included. A couple of fellow members sat with us and shared their take on the omnivorous menu, to provide for full coverage. As the first wines were served Sandra spent some time introducing her winemaking philosophy. Interestingly she emphasized the fact that at Tinhorn Creek the grapes don’t actually come first – she is adamant that their greatest resource is people. Without the superbly talented and passionate people present at the winery – and the ideas they share – the grapes have no hope of being expressed to the fullest. It is Sandra’s hope that nurturing great people shows through in the wines they make together as a team. 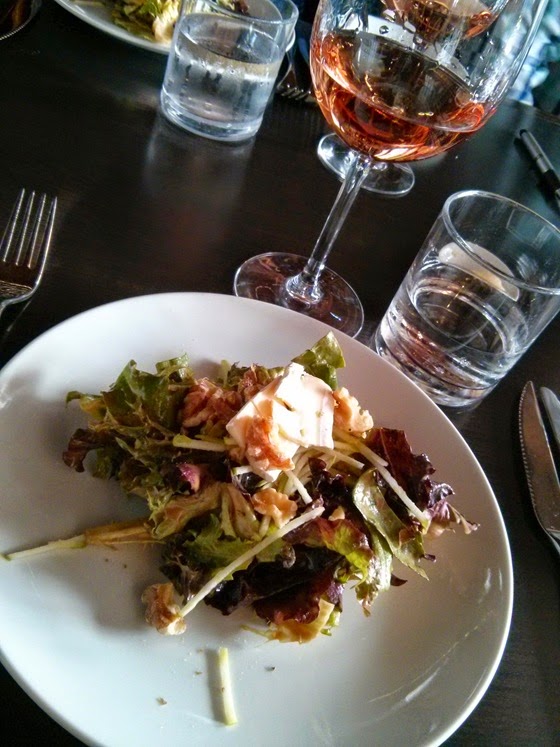 The first course featured the brand new 2013 Oldfield Series 2Bench Rosé, traditionally produced exclusively from Cabernet Franc since the first vintage in 2009. In 2012 the Cabernet Franc was joined by a block of Syrah that didn’t quite fit with the remainder of the winery’s varietal Syrah; its lighter qualities proved ideal for Rosé however. Now, for the 2013 vintage the wine is back to the original formula, with 100% Cabernet Franc from the winery’s Black Sage Bench Diamondback Vineyard. The salmon-coloured wine is not produced in a saignée style, as is common, but is instead a dedicated Rosé, with the red grapes pressed as if it were a white wine. Chef Koay provided a tart grapefruit-infused BC Spot Prawn Ceviche to pair with the bright, summer-celebratory wine, and for the vegetarians a spicy salad of gathered greens, Granny Smith apple, Brie, and toasted walnuts. The kick provided by the aged Balsamic dressing risked dominating the dry wine, but we still relished the rhubarb nose and tart apple and currant palate. 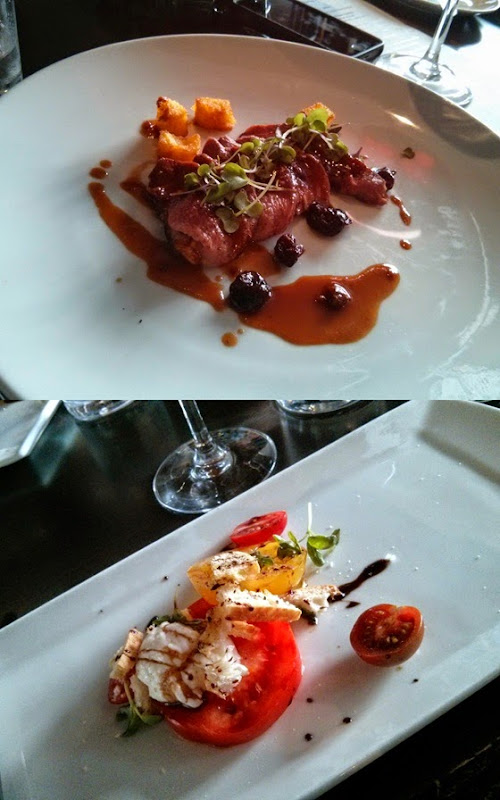 Sandra had generously arranged a preview of the upcoming 2010 Oldfield Series Pinot Noir with our next course. Despite approaching four years of age, this wine is still not for sale! Sandra and her team recently made the tough decision to add additional bottle age to their Pinot Noir, knowing it would pay off in the long run. It meant going without the varietal in the tasting room for several months when the traditional release schedule was overruled, but the wines have clearly benefited from greater maturity. The 2010 Oldfield Series will have enjoyed a full two and a half years in bottle before its release in July! Paired with either Duck Breast & Crispy Polenta, or Heirloom Tomato & Burrata Salad, the softly textured, dark and rich wine provided a superb reminder of the range of Pinot Noir that can be produced in BC. An admittedly high alcohol nose of cherries and earth led generously into a bold, bright berry fruit palate just coming into its own. The fresh tomatoes in our salad enhanced, and were enhanced by the wine, leaving us longing for more mouth-watering delights. 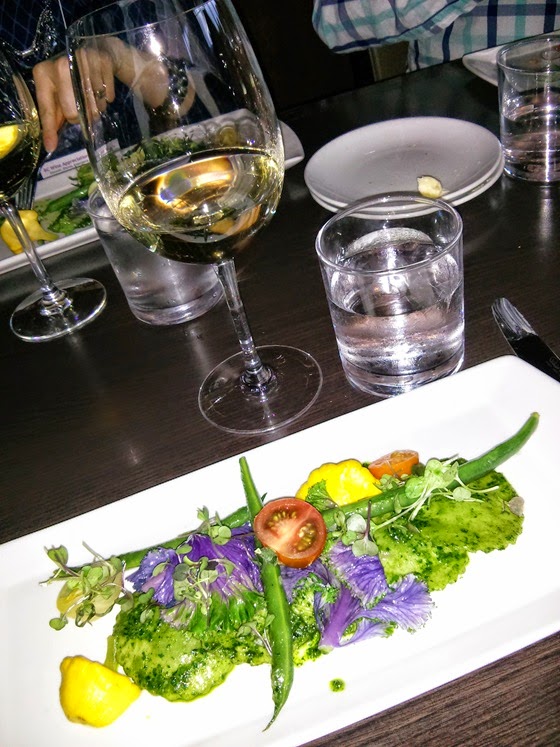 We mixed things up next by reversing trajectory to white wine territory, in a non-traditional course change that featured yet another Oldfield Series early preview! The 2013 2Bench White won’t be sold to the public until June, but Sandra couldn’t wait to share it with us. Chef Koay and Sommelier Sandy had prepared a perfect pairing of Honeydew-cured Wild Salmon Gravlax or vibrant Spinach Ravioli to match Sandra’s blend of Sauvignon Blanc, Chardonnay, Semillon, Viognier, and Muscat. The 2Bench White has always expressed itself with generous melon aromas, and the new vintage did not disappoint, showing honeydew, apples, and lemon curd leading into the complex, roundly-textured palate. The toasted pinenuts, shaved baby vegetables, and micro greens with the Gravlax sounded superb, but the Ricotta cheese and spinach in our Ravioli were definitely a highlight of the meal. 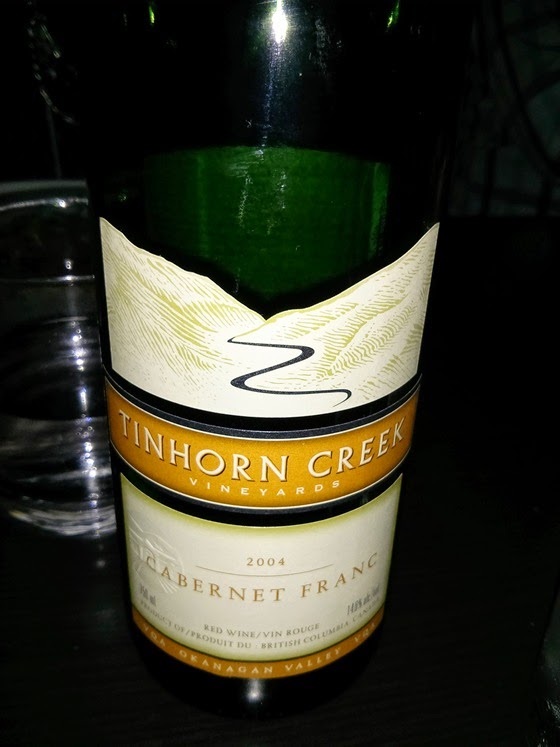 The fourth course was a treat for long-time BC wine fans, with a well-aged library release showing off Tinhorn Creek’s venerable varietal Cabernet Franc. The 2004 vintage was the winery’s first Franc with Stelvin screw cap, and despite an expected life of 5-6 years from vintage it is still going strong, helped along by that secure closure perhaps. Alongside herb-crusted Elk Loin and Wild Mushroom Ratatouille, the wine made an impression on the nose with big, bold aromas of leather, dark fruit, and roasted meat. The juicy acidity (and 14.6% alcohol) no doubt contributed to the wine’s long life, and has ensured it remains very food friendly even ten years from vintage date. The rich flavour palate held ripe figs, black licorice, mocha, and a hint of creosote to keep things interesting on the long finish. 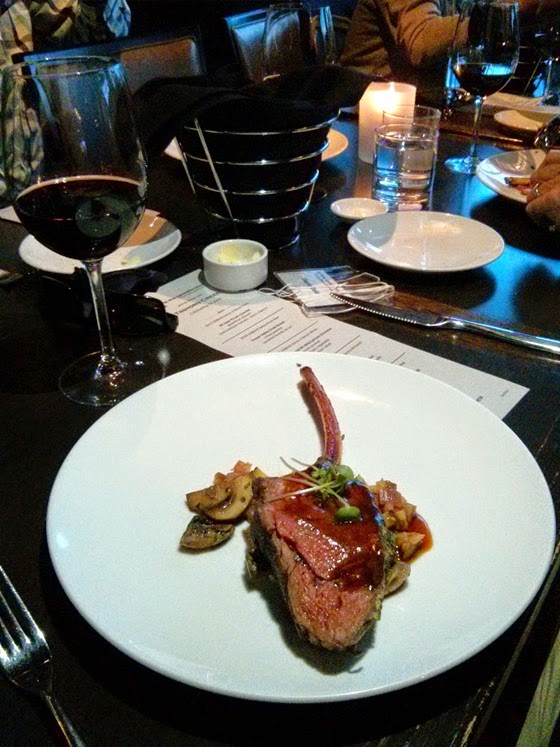 Our final pairing included another look back as we enjoyed the 2008 Oldfield Series 2Bench Red, only the second vintage of Sandra’s big red blend. The wine originally experienced 18 months in new French oak, and then a further 18 months in bottle before release in October of 2011. Now in bottle for nearly four years the 40/40/20 blend of Cabernet Sauvignon, Merlot, and Cabernet Franc was ready to be enjoyed with Spring Lamb Chop & Stilton Cream or Millet Couscous with Charred Vegetables. Generous fruit aromas wafted easily from the glass, featuring prominent blueberries and a touch of tobacco and leather, while the full-bodied, black currant palate showed off very good balance atop dusty tannins. 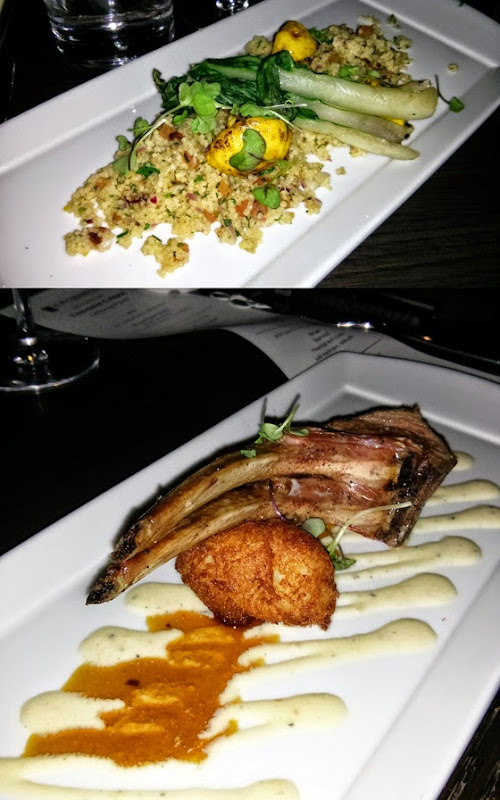 As the evening wound down and we polished off the remaining wine the LIFT kitchen surprised us with a pleasant little after-dinner selection: Gingersnap cookies, biscotti, and fresh raspberries provided a sweet touch at the end of the meal after the sun had set. We wrapped up over conversations about the evening’s favourite pairings as well as the bright future of BC wine. Many well-deserved thanks to Sandra Oldfield as well as the entire LIFT team concluded matters, until we aim to top ourselves again next year!