Three cheers for 2014: the rich, ripe reds of that superb vintage are seemingly everywhere one looks in the Okanagan these days. A recent trip to Osoyoos provided the opportunity to stock up on the latest and greatest from the cellar door, leaving me with a divine selection to fawn over this month. While it may seem odd to have focused on so many big reds in the summer, rest assured there were more than enough bottles of white and Rosé keeping these cellar-dwellers company on the ride home. And not every white is destined for immediate consumption, because locally legendary Riesling is just as age-worthy as the neighbouring collectible reds. 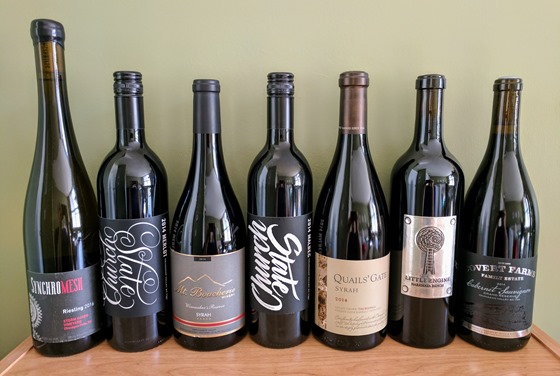 Synchromesh 2016 Black Label Storm Haven Vineyard Riesling: The 2016 vintage at Alan Dickinson’s Okanagan Falls home vineyard was split into 182 cases of this Black Label, wax-sealed reserve plus a White Label for earlier consumption. While both wines host a generous 38 g/L of sugar, the bracing acidity is even higher in the Black Label version, providing for a stunning pH of 2.81 and a very long life ahead. The team at GismondiOnWine have tasted nearly every vintage since the inaugural 2010, culminating in a library tasting in mid-March that found even the “vibrant and youthful” 2011 (with 55 g/L) to have “so many years to go still”. Anthony Gismondi’s 93-point review of the newest release praised the benefits of long hang time last fall, finding the purity of fruit to be “impressive to say the least.” Winery Direct $40

Church & State 2014 Merlot: Wrapped in the winery’s new Signature Series label, with varietally-unique calligraphy, 450 cases of Merlot come from a blend of Black Sage Bench and Golden Mile fruit from two vineyards, including the home Coyote Bowl property. One of several generous new 2014 reds, the Merlot has done particularly well for the winery, being named Best of Class (Double Gold) at this year’s All Canadian Wine Championships, one of two (the other for Trebella 2015) in addition to a pair of Gold medals. Even before the All Canadians, February’s New World International Wine Competition in California bestowed the honour of Best Canadian Wine for this Best of Class Merlot. Released just in time for the busy summer touring season, stocks are already growing low thanks to the intense roasted cocoa aromas and rich, round blueberry palate, followed by a sweet and savoury smoked finish to wrap it all up. Great for summer barbecue season no doubt, but secure under screwcap with further cellaring in mind. Winery Direct $40

Mt. Boucherie 2014 Winemaker’s Reserve Syrah: After a tumultuous couple of years in receivership, established West Kelowna winery Mt. Boucherie re-emerged this spring, as John Schreiner detailed in a February article. Most important to consider from John’s detailed summary of the proceedings is that talented and committed Winemaker Jim Faulkner remained at the helm throughout. As the budgetary prospects improved Jim could finally acquire bottles and labels for reds that include this smoothly aged Similkameen Valley Syrah, after it spent an unexpected 22 months in oak. The resulting 381 cases of “full and rich” wine are felt well-worthy of a 92-point score in John’s experienced eyes. Later in the same month, a taste by David Lawrason at WineAlign yielded similar accolades, with another 92-points for the “classic Syrah nose,” fine tannins, and elegant, rich palate. Winery Direct $40

Church & State 2014 Malbec: Having taken some time off after two consecutive Best of Class awards for 2011 and 2012 vintages the Malbec is back at Church & State. Sourced from the Rattlesnake Vineyard on the Golden Mile, 225 cases of what is always a local rarity snagged one of the winery’s aforementioned Gold medals at the All Canadians (and the only Gold-medal Malbec in the Single Red Varietal category). I was fortunate enough to enjoy a sample upon visiting the winery, and found black cherry and chocolate aromas hinting at what is another ripe and rambunctious red. Equally rich and intense as the Merlot, I briefly reminded of drinking chocolate upon tasting the full-bodied purple-fruited palate. Here’s another exciting candidate for the cellar if you can keep it closed in the meantime. Winery Direct $35

Quails’ Gate 2014 “The Boswell” Syrah: Since the initial 2012 release (intended as a one-time only anniversary wine) received one of the BC Wine Awards’ new Platinum medals in 2014, Quails’ Gate has been one to watch for Syrah. While the winery’s focus remains Chardonnay and Pinot Noir, small amounts of winery exclusive Syrah (unexpectedly from West Kelowna) continue to impress: 570 cases of the latest have garnered universal praise in preview tastings last year. GismondiOnWine’s Treve Ring complimented the “haunting” complexity and finesse for 91-points in October; John Schreiner paralleled his score of 2013 with another 94-point review in December; and Deanna Van Mulligen felt 93-points was well worth it in February for the “amazing structure.” Over at WineAlign reviewers exalted the focus, length, and richness, with emphasis on its cellaring potential for enjoyment into the next decade - I’m more than happy to oblige. Winery Direct $61

Little Engine 2015 Platinum Cabernet Franc: After opening last summer with high-end Chardonnay and Pinot Noir the fuller-bodied reds at Little Engine have now come into play, and the top tier Platinum series has supplanted Gold at the apex of their portfolio. John Schreiner was invited to preview the new releases earlier this month and had nothing but good - and very good - things to say. I stopped by soon afterwards, with an eye to examining wines that garnered some of John’s highest scores ever. The 96-point Platinum Merlot was in my sights, but as good as it was, I was struck even greater by this powerful Cabernet Franc, still 95-points as far as John was concerned (and a complimentary 89-points from Anthony Gismondi); the mouth-watering intensity had me excited to lay down a bottle. Of the three new Platinum reds, the Cabernet Franc is most rare, at just 49 cases produced - now minus one precious bottle. Winery Direct $86

Covert Farms 2014 Grand Reserve Cabernet Sauvignon: It’s been awhile since I tasted a barrel sample of this young and highly promising Cabernet alongside the BC Wine Appreciation Society in March of last year. In the meantime, it was bottled and apparently quietly released at the Oliver tasting room below McIntyre Bluff. Visiting the secluded tasting room amongst 650 organically-farmed acres   provided the opportunity to get a bottle from the mere 48 cases produced. It’s become evident that 2014 was a well-above-average vintage for BC Cabernet Sauvignon, and Covert’s micro-lot is further testimony. A taste during my visit showed off dark and intensely ripe dried fruits, with age-worthy tannin to boot, and a mouth-watering selection of the winery’s descriptors that include red licorice, cocoa, vanilla, and baking spice. Winery Direct $59